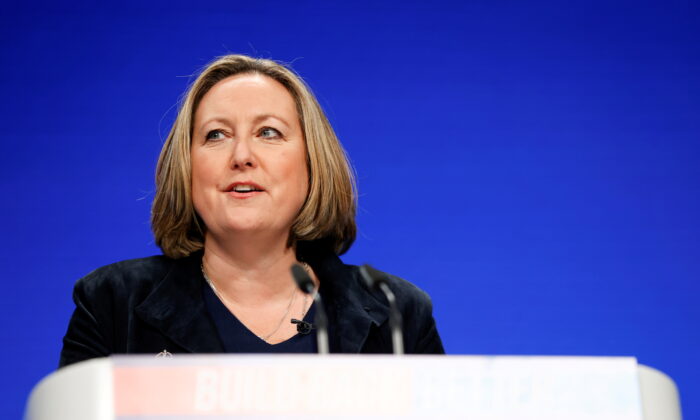 LONDON—British trade minister Anne-Marie Trevelyan will on Tuesday push her G20 counterparts to end what she called market-distorting practices and rally behind World Trade Organization reform.

Trevelyan, who took up the post last month in a ministerial reshuffle, will pick up where her predecessor Liz Truss left off: arguing for a level playing field on international trade as Britain seeks to carve out a new post-Brexit role for itself.

“We cannot, and will not, allow British businesses who play by the rules to be damaged and undercut by market-distorting practices from other countries,” she said in a statement ahead of a G20 trade ministers’ meeting in Italy.

“Today’s meeting is a great opportunity to rally our G20 partners and build alliances that can defend the global trading system and help bring it into the 21st century.”

After spending years arguing that freedom to strike free-trade deals outside of the European Union would be one of the main benefits of Brexit, the government has repeatedly called for the global trade rulebook to be modernized.

Trevelyan will hit out at “harmful and distorting” industrial subsidies—a criticism her department has previously used to single out China. China is a G20 member and seen by some to benefit from WTO rules that treat it as a developing economy.

Italy’s Prime Minister said on Friday he was confident that the meeting of the G20 leaders at the end of October would reach a strong commitment to reform the WTO.