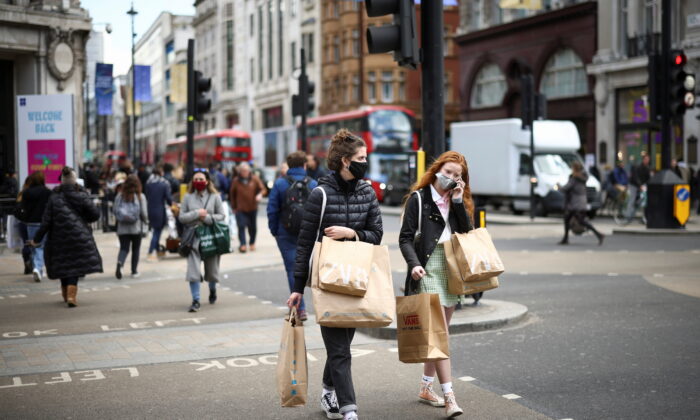 LONDON—British retail sales unexpectedly fell for a fifth month in a row last month, despite a rush of motorists filling their cars with fuel, adding to signs that Britain’s economic recovery is losing momentum.

Sales volumes dropped by 0.2 percent in September, official figures showed on Friday, as supply-chain problems led to gaps on store shelves. It marked the longest run of consecutive monthly falls since the series began in 1996 and bucked economists’ expectations in a Reuters poll for a rise of 0.5 percent.

This softness adds to the conundrum faced by the Bank of England over whether to counter rapidly rising inflation by raising interest rates next month, or instead to wait for the economy to recover more of the ground it lost to the pandemic.

Retail sales rebounded strongly in the first part of the year as lockdown restrictions eased first for shops. But they have fallen steadily since a peak in April, partly as people spent more on holidays and eating out after social-distancing restrictions were relaxed more generally.

In the three months to September sales fell 3.9 percent, which the Office for National Statistics said would reduce broader economic growth in the third quarter by 0.2 percentage points.

Compared with before the pandemic, sales volumes are 4.2 percent higher, but they are 1.3 percent below where they were a year ago.

Supply-chain bottlenecks led to gaps on some supermarket shelves, and many petrol stations ran out of fuel in late September and early October as shortages of tanker drivers led to queues of cars trying to fill up.

“Labor shortages across the supply chains, on farms, factories, warehouses and lorry drivers, all threaten to derail this recovery,” the British Retail Consortium’s chief executive, Helen Dickinson, warned after the data.

Petrol sales in September exceeded pre-pandemic levels for the first time, but there was a sharp drop in sales of household goods such as furniture and lighting, the ONS said.

Consumer price inflation is also accelerating sharply, due largely to higher energy prices, and the BoE predicts it will exceed 4 percent around the end of this year, double its target level.

A narrower measure of inflation used in the retail sales data rose to 3.7 percent in September, its highest since December 2011.

The prospect of higher prices—as well as a more recent upsurge in COVID-19 cases—has dampened consumers’ mood. GfK reported earlier on Friday that its long-running sentiment survey showed the lowest morale since February, when Britain was still in lockdown.

Retailers also face a dilemma over how much they should pass on cost rises to consumers. Discount chain Poundland and online fashion retailer Boohoo both warned of lower profit margins in recent weeks.

The BRC said three out of five retailers expected prices to rise before Christmas.

Another online fashion retailer, ASOS, parted ways with its chief executive last week amid fears that supply chain pressures and consumers returning to pre-pandemic behavior would reduce profits by 40 percent next year.

Friday’s ONS data showed online spending remained strong overall at 28 percent of total retail sales in September, up from 20 percent before the pandemic. But it is far below its peak of 37 percent in January when high-street shops were closed during lockdown.

By David Milliken and Andy Bruce