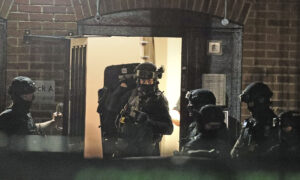 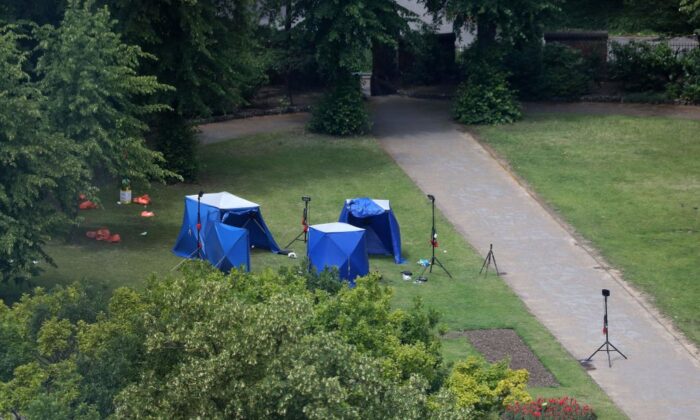 A picture shows police tents and equipment at the scene of a fatal stabbing incident that is being treated as terrorism in Forbury Gardens park in Reading, west of London, on June 21, 2020. (AFP via Getty Images)
UK

The attacker who murdered three men in a park in Reading, UK, last summer was on Monday given a whole-life jail sentence without any possibility of parole or conditional release.

Khairi Saadallah, 26, stabbed James Furlong, 36, David Wails, 49, and Joe Ritchie-Bennett, 39, in Forbury Gardens on the evening of June 20 last year. Saadallah also seriously injured three other men who were in the park.

At the Old Bailey in London, judge Mr. Justice Sweeney determined it was a jihadist attack and sentenced Saadallah to a whole-life order, describing it as a “rare and exceptional” case.

The judge said the attack was “ruthless and brutal”, and the offences were carried out in a “pre-meditated, planned, and carefully executed manner”.

Prosecutor Alison Morgan QC reportedly told the court that Saadallah “believed that in killing as many people as possible that day he was performing an act of religious jihad.”

“In less than a minute, shouting Allahu Akhbar [Arabic “God is the greatest”] the defendant carried out a lethal attack with a knife, killing all three men before they had a chance to respond and try to defend themselves,” she said.

Following his arrest, Saadallah admitted at the police station that what he had done was jihad. He later pleaded guilty to the three murders and three attempted murders.

According to the sentencing remarks, Saadallah had combat training and fought in Libya in 2011, as a member of the extremist Islamic militia Ansar al-Sharia, during the uprising against the Gaddafi regime.

He fled from the civil war in Libya, North Africa, and arrived in the UK as an asylum seeker in 2012, but was twice refused asylum. Between 2013 and 2020, he was arrested and convicted of various offences in the UK.

“The seriousness of the murders is … aggravated by the fact that the Defendant has 6 previous convictions for some 16 offences,” the judge said.

Saadallah had a history of mental health issues and substance abuse. But, after considering the evidence and various psychiatrist assessments, the judge said the defendant “did not, and does not, have any major mental illness” that would have lowered his culpability for the attacks.

Saadallah was released from prison just 15 days before he committed the murders. He could not be deported to Libya because of the ongoing unrest in the country.

The case has raised questions concerning why Saadallah wasn’t being more closely monitored by the security and intelligence services, which may have prevented the murders.

The police had visited Saadallah the night before the attack, but Saadallah told them he was “alright.”

James Furlong’s father, Gary, spoke after the sentencing, saying, “On the facts of this case, there are now serious questions that need answering, most notably, how the killer was ever in a position to commit these horrific acts.”

Rakib Ehsan, author of a report on foreign-national Islamist terrorism in the UK, wrote in a tweet on Tuesday that the case showed a “fundamental systems failure”, and that “the UK must learn a great deal from this case”.

The case of Khairi Saadallah – a Libyan refugee who had developed a serious history of criminality (including knife-related offences), before stabbing three people to death in a terrorist attack – was a fundamental systems failure.

The UK must learn a great deal from this case.

Home Secretary Priti Patel told the BBC after the attack that lessons must be learned so that it doesn’t happen again. She said the security and intelligence services have records on thousands of “subjects of interest” and “people of concern” and work intensively to assess the risks posed by such people.