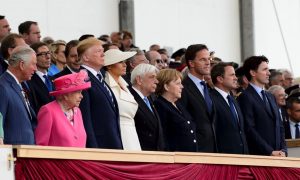 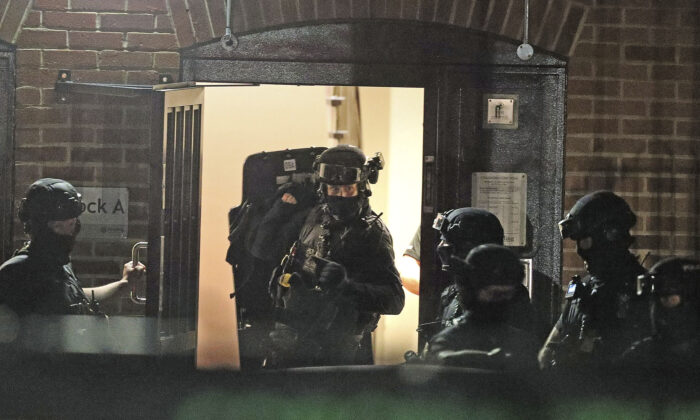 Armed police officers work at a block of flats off Basingstoke Road in Reading after an incident at Forbury Gardens park in the town centre of Reading, England, Saturday on June 20, 2020. (Steve Parsons/PA via AP)
UK

READING, England—A stabbing rampage in a British park on a summer evening that left three people dead is being considered a terrorist attack, police said on June 21.

A 25-year-old man who is believed to be the lone attacker is in custody, but officials said the motive for the carnage was unclear. Authorities said they weren’t looking for any other suspects and didn’t raise Britain’s official terrorism threat level from “substantial.”

Three other people were seriously injured in the attack on June 20 in Forbury Gardens park in Reading, a town of 200,000 people 40 miles (64 kilometers) west of London.

Officers were called to reports of stabbings just before 7 p.m. and arrived to find a “horrific” scene, Chief Constable John Campbell of Thames Valley Police said. He said a suspect was apprehended within five minutes.

A Reading man of that name who is the same age as the suspect was sentenced to two months in prison in 2019 for assaulting an emergency worker. The same man was also charged in 2019 by assaulting a judge who had sentenced him.

The BBC reported that Saadallah was investigated by British security services in 2019 over concern he planned to travel abroad to join a jihadi group, but that he wasn’t determined to be a major threat.

Prime Minister Boris Johnson, who met security officials, police, and senior ministers on June 21 for an update on the investigation, said he was “appalled and sickened” by the attack.

“If there are lessons that we need to learn” or legal changes needed to prevent such attacks, “then we will learn those lessons and we will not hesitate to take action where necessary,” Johnson said.

Police officers patrolled cordons on the roads leading to the park on June 21, and blue-and-white tents were erected near the attack site. Overnight, heavily armed officers entered an apartment about a mile away, and a loud bang was heard.

Notes and bunches of flowers had been left June 20 by the police tape in tribute to the victims. One of the people killed was identified as James Furlong, a teacher in the nearby English town of Wokingham.

“There are no words that anyone can say to express how horrible and senseless this was,” one said. “Our prayers are with all the victims and their families and friends. #Readingstandsunited.”

While the attack came hours after a Black Lives Matter demonstration at Forbury Gardens, police said there was no connection between the two events.

Personal trainer Lawrence Wort said the park was full of groups sitting on the grass on June 20 evening when “one lone person walked through, suddenly shouted some unintelligible words and went around a large group of around 10, trying to stab them.”

Britain has been hit by several terror attacks in recent years, both by people inspired by the Islamic State group and by far-right extremists. Islamist-inspired attacks include a suicide bombing at an Ariana Grande concert in Manchester that killed 22 people in 2017 and two deadly vehicle and knife attacks in London the same year.

In several cases, attackers have been known to police. In November, a man who had been released after serving a prison sentence for a terrorism offense stabbed two people to death at a justice conference in London.

In February, a man recently released from prison after serving time for terrorism-related offenses strapped on a fake bomb and stabbed two people on a busy London street before being shot to death by police. No one else was killed.

Britain’s official terrorism threat level stands at “substantial,” the middle level on a five-rung scale, meaning an attack is likely.