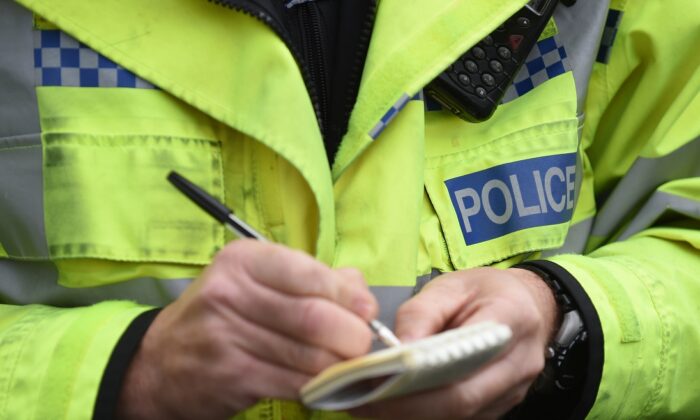 Undated photograph of a police officer taking down notes at the scene of a crime in England. (PA)
UK

UK Police ‘Can Do Better’ on Burglaries and Theft: Chief Inspector

Most victims of robbery, theft, and burglary “aren’t getting the justice they deserve” because police officers are missing key opportunities to investigate crimes, according to a report by Her Majesty’s Inspectorate of Constabulary and Fire & Rescue Services (HMICFRS).

Published Aug. 11, the report found that in 71 percent of cases, police officers did not give victims during the initial 999 call crucial advice on how to preserve the scene so that forensic opportunities would remain to allow detection of the offender.

Compliance with the code of practice for victims of crime in England and Wales was “inadequate” in 46 percent of investigations and victim needs assessments were rarely completed.

Many forces lack the “investigative capacity and capability” to properly tackle burglary, robbery, and theft, and this was partly blamed on a nationwide shortage of experienced detectives.

The report also said inexperienced officers were not given enough help, with a third of burglary, robbery, and theft cases lacking sufficient supervision from a senior officer.

‘Burglary, Robbery, and Theft Are Not Minor Crimes’

The Chief Inspector of Constabulary, Andy Cooke, said: “Burglary, robbery, and theft are not minor crimes. They are crimes that strike at the heart of how safe people feel in their own homes or communities. The current low charge rates for these crimes are unacceptable and unsustainable. There needs to be a concerted drive to address this issue because it directly affects the public’s confidence in the police’s ability to keep them safe.”

Recent Home Office data shows that in the year to December 2021 just 6.6 percent of robbery offences and 4.2 percent of thefts in England and Wales led to someone being charged.

Cooke told Sky News, “It is quite apparent that policing is missing opportunities for that initial call that’s received right through to the conclusion of the individual case … policing can do better.”

He said many detectives felt “disengaged and devalued and frustrated that they can’t give the quality of service that the victims deserve.”

Earlier this year the HMICFRS put the Metropolitan Police into a form of “special measures,” citing problems with training and response to 999 calls as well as other issues.

Cooke said police forces across the country were suffering as there was “a lot of inexperience at the moment,” with 31 percent of officers having joined in the last five years.

The Association of Police and Crime Commissioners’ Joint Local Policing Leads, Steve Turner and Jeff Cuthbert, said, in a statement sent out by email: “Her Majesty’s Chief Inspector of Constabulary’s labels the low charge rates across forces as ‘unacceptable and unsustainable.’ As commissioners we will continue to hold our forces to account and we will be monitoring these figures very closely going forwards.”