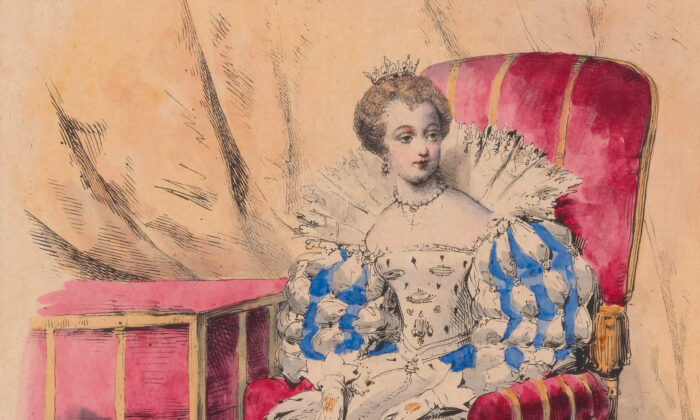 A coloured lithograph from a series depicting a Mary, Queen of Scots-themed mask ball held in France, dated 1829, in an undated handout photo. (National Library of Scotland/PA)
UK

LONDON—British police arrested a man on Tuesday in connection with the theft of gold rosary beads carried by Mary Queen of Scots to her execution in 1587, among items worth more than £1 million ($1.37 million) stolen from a castle in the south of England.

Mary, a Roman Catholic, was ousted from the Scottish throne then imprisoned, accused of treason, and executed on the orders of her Protestant cousin Elizabeth I of England, a series of events that loom large in the British imagination.

Several other historic treasures including coronation cups as well as gold and silver items were among the loot taken from a display cabinet at Arundel Castle in the county of West Sussex in May.

Sussex Police said a 45-year-old man was arrested on suspicion of burglary on Tuesday in Eckington, Worcestershire, central England. The man remains in custody for questioning.

“Our investigation into the Arundel Castle burglary remains live and this action marks a significant step in our enquiries,” said Detective Inspector Alan Pack of Sussex Police.

Six other men were arrested for crimes unrelated to the castle burglary.

Mary was briefly queen of France. She was later driven out of Scotland by rebellious aristocrats and fled south in 1568 at the age of 25, throwing herself on the mercy of her cousin Elizabeth.

But with many Catholics throughout Europe convinced that she had a better claim to the English throne than the Protestant Elizabeth, Mary was an unwelcome visitor.

She was confined in various English castles and prisons, convicted of plotting against the English queen, condemned to death for treason on charges she denied and finally beheaded.

In June, Sussex Police released photos of two ladders used during the burglary. The police said the ladders were used to access the dining room area, where a window was forced open to gain entry to the castle.