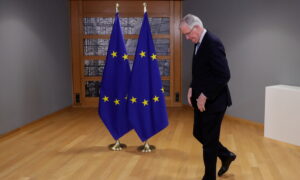 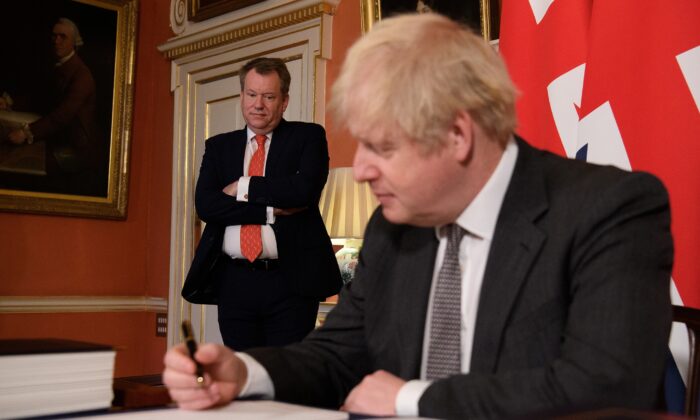 UK chief negotiator David Frost looks on as Britain's Prime Minister Boris Johnson poses for a picture after signing the Brexit trade deal with the EU at number 10 Downing Street in London, Britain, on Dec. 30, 2020. (Leon Neal/Pool via Reuters)
UK

LONDON—Prime Minister Boris Johnson has given David Frost, the man who led Britain’s Brexit negotiations, a job in his top team of ministers to advise on relations with the European Union, the prime minister’s office said on Wednesday.

The surprise move puts one of Johnson’s most trusted allies, a eurosceptic former diplomat and champion of British sovereignty, in charge of managing a post-Brexit relationship with Brussels that has got off to a rocky start.

Frost served as Johnson’s chief Brexit negotiator, both for the initial deal, which took Britain out of the EU on Jan. 31, 2020, and for negotiations on the subsequent trade deal that came into force at the end of last year.

The government had previously indicated that Frost would continue to advise the government on matters relating to the EU, but his appointment to Johnson’s cabinet of top ministers was not expected.

As a minister rather than an adviser, Frost will have greater influence and be able to direct the work of officials.

He takes on two formal roles previously held by senior minister Michael Gove, putting him in charge of attempts to improve the trading terms for Northern Ireland and giving him a top role in helping to resolve any future disputes over the deal.

“I am hugely honoured to have been appointed minister to take forward our relationship with the EU after Brexit,” Frost said on Twitter.

“In doing so I stand on the shoulders of giants & particularly those of @michaelgove who did an extraordinary job for this country in talks with EU over the past year.”

Frost is an unelected member of the House of Lords, parliament’s upper chamber. His appointment will take effect from March 1, Johnson’s Downing Street office said in a statement.

Jill Rutter, senior research fellow at the UK in a Changing Europe research body, said the move raised questions about how the EU relationship would be managed.

“It looked as though [Gove] was the pragmatist and Frost the sovereignty hard liner,” she wrote on Twitter.

Gove who previously led the implementation of the EU exit agreement and free trade deal, welcomed Frost’s appointment. He will continue in his ministerial role in charge of the cabinet office.

Frost will take over from Gove as UK chair of the Withdrawal Agreement Joint Committee. This means he takes on responsibility for negotiating with Brussels to make the complex parts of the trade deal relating to Northern Ireland work smoothly.

The EU has so far rejected British demands for more time to solve serious disruptions to free trade between Britain and Northern Ireland resulting from the trade deal.

By Alistair Smout and William James