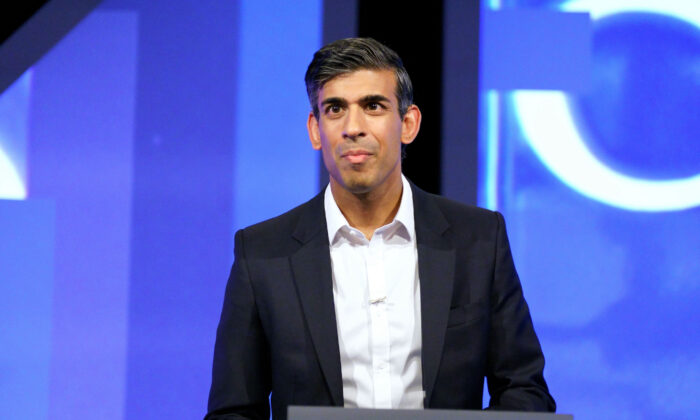 “I will also legislate to ensure that the atrocious crimes in Rochdale that we were all so appalled by will never be repeated. Our police forces must be fully focused on fighting actual crime in people’s neighbourhoods and not policing bad jokes on Twitter,” said Sunak in The Telegraph’s report on his latest campaign policy intervention.

But the former Detective Constable who became a whistleblower for exposing the poor handling of the Rochdale child sex abuse ring case by her own force, told The Epoch Times that she has “heard it all before.”

In April, the Chief Constable of Greater Manchester Police Stephen Watson admitted the force was “borderline incompetent” in its handling of the Rochdale grooming gangs and acknowledged that his predecessors had “failed” children in the past.

As part of his part plan to cut crime Sunak promised harsher sentences for criminals who refuse to attend court for their sentencing hearings and a crackdown on grooming gangs.

“As prime minister, I will do everything possible to make sure victims have the chance to look their perpetrator in the eye and witness justice being served. We must not allow criminals to continue to take the coward’s way out and not face up to their crimes,” said Sunak.

Thousands of English girls are known to have been sexually exploited over the last few decades by gangs of predominantly Pakistani and South Asian heritage—often referred to as Asian grooming gangs—across northern English towns and cities.

In June, Greater Manchester Police and Oldham Council said they are “deeply sorry” after a report said both failed to protect girls from grooming gangs between 2011 and 2014 and “missed opportunities” to protect a girl who tried to raise the alarm.

Maggie Oliver is a former Detective Constable in the Greater Manchester Police who turned whistleblower by exposing the Rochdale child sex grooming scandal in 2012.

“My thoughts are that I’ve heard it all before,” Oliver told The Epoch Times by email.

“Myself, victims and the public are so sick of empty promises, more apologies and a pretence they are taking these horrific and life-destroying crimes seriously when they most certainly are not,” she said.

In 2019, Oliver founded The Maggie Oliver Foundation to highlight the problem of child sexual abuse and exploitation (CSAE) on a national scale, particularly the failures of the authorities to address this effectively. She also was a Programme Consultant on the multi-dramatisation of the case entitled Three Girls (BBC One) as well as a key contributor to The Betrayed Girls documentary (BBC One).

“We need a radical overhaul of the whole so-called criminal justice system and that needs people working with victims and survivors who truly understand,” she said.

Oliver added that she has already heard a whole parade of politicians making empty promises for the past ten years including Priti Patel, Boris Johnson, Sajid Javid, Keir Starmer, and Tony Blair. “And yet this problem is growing not getting less.”

“That’s the problem, Rishi is throwing out a promise because he’s thinking of himself, and being elected. If he were to win I do not have any real belief he would tackle this. It would once again slide away and disappear from view, as has repeatedly happened,” said Oliver.

The Bad Law Project was set up by the Reclaim Party’s Laurence Fox as well as Fair Cop’s lawyer Sarah Phillimore and former policeman Harry Miller to fight what they believe is “political ideology disguised as law.”

Fair Cop, the organisation set up in response to what it calls a “Big Brother” overreach of various police forces, takes on cases from people who they believe have been criminalised for expressing opinions, on social media and in real life, that don’t contravene any laws.

Launched this year, The Bad Law Project say they “will litigate on behalf of victims of bad law, raising funds to bring cases in the public interest that will restore trust and confidence in the rule of law.”

“The Bad Law Project will hold the next Prime Minister and Home Secretary to account. No more turning a blind to crimes committed by a known demographic. And no more police interference in satirical, political, controversial, or offensive speech,” said Miller to The Epoch Times by email.

Under Sunak’s new plans, a new criminal offence would be created for belonging to or facilitating a grooming gang. A database of such groups would also be created to help investigators.

Sunak’s place in the final two of the Tory leadership race looked increasingly secure on Monday, with Penny Mordaunt still clinging on to second place. If he wins, he will be named the next prime minister on Sept. 5.  The remaining Conservative leadership candidates include Rishi Sunak, Penny Mordaunt, Kemi Badenoch, and Liz Truss.

According to the result of the latest survey by ConservativeHome, published on Sunday, Badenoch was the most popular candidate among grassroots party members, followed by Truss, Sunak, Mordaunt, and Tugendhat.

Alexander Zhang, Lily Zhou, and PA contributed to this report.