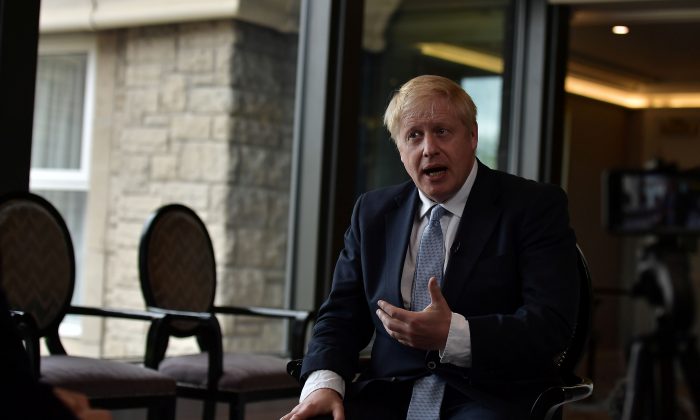 READING, England—Boris Johnson, who could be Britain’s prime minister by the end of the month, said he backed the people of Hong Kong every inch of the way and cautioned China that “one country, two systems” should not be cast aside.

Britain has repeatedly pressed China to honor its commitment to protecting freedoms in Hong Kong after police fired tear gas to disperse protesters rallying in the former British colony against a now-suspended extradition bill.

Hong Kong has been rocked by the largest protests in China since crowds demonstrated against the bloody suppression of pro-democracy activists in and around Beijing’s Tiananmen Square in June 1989.

“The people of Hong Kong are perfectly within their rights to be very skeptical, very anxious about proposals for extradition to the mainland that could be politically motivated, that could be arbitrary and could infringe their human rights,” Johnson told Reuters in an interview during a visit to a police training center in southern England.

“So yes I do support them and I will happily speak up for them and back them every inch of the way,” the former foreign secretary said.

Late on Monday, hundreds of protesters in Hong Kong besieged and broke into the legislature after an annual demonstration held on the anniversary of its 1997 return to Chinese rule.

The turbulence in Hong Kong was triggered by an extradition bill critics say will undermine Hong Kong’s independent judiciary and give Beijing powers to prosecute activists in mainland courts, which are controlled by the Chinese Communist Party.

Johnson is vying with Foreign Secretary Jeremy Hunt for the top job. The results of a vote by around 160,000 members of the Conservative Party on who should be their leader and next prime minister will be announced on July 23.

Britain’s relations with China under outgoing Prime Minister Theresa May have been complicated by a disagreement with Washington over whether to ban China’s Huawei from 5G telecommunications networks as a security risk.

Britain’s National Security Council discussed Huawei in April and a preliminary decision was made to block it from all core parts of the 5G network but to give it restricted access to non-core parts.

That angered some in the administration of U.S. President Donald Trump and raised concerns among some allies in the Five-Eyes security alliance which comprises the United States, Britain, Canada, Australia, and New Zealand.

Johnson said Chinese companies were welcome in Britain “but you would not expect the UK to do anything to compromise its vital national security infrastructure.

“You would not expect me as prime minister to do anything to compromise the ability of our fantastic intelligence services to share information as they do, particularly with our Five-Eyes partners, so that is the principle that will guide us.”