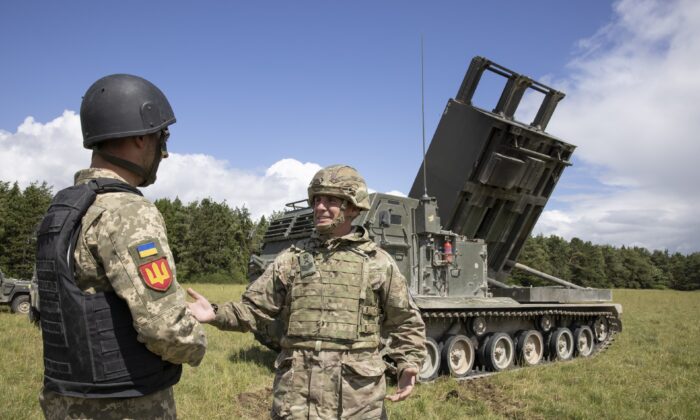 The UK has announced another £1 billion ($1.2 billion) in military aid to Ukraine, a significant increase on the £1.3 billion of military assistance already provided to help the country resist the Russian invasion.

The extra support was announced at the NATO summit in Madrid by Prime Minister Boris Johnson, who said the Russian invasion “continues to take Ukrainian lives and threaten peace and security across Europe.”

“UK weapons, equipment, and training are transforming Ukraine’s defences against this onslaught. And we will continue to stand squarely behind the Ukrainian people to ensure Putin fails in Ukraine,” Johnson said.

The announcement brings the total UK military support since the outbreak of war to £2.3 billion ($2.8 billion)—more than any country besides the United States, according to the UK government.

“We have to make it our absolute priority to stop this war and to push Vladimir Putin and the Russian troops out of Ukraine,” Truss said.

The promise of extra military support comes after Ukrainian President Volodymyr Zelenskyy urged NATO leaders to do more to help his country resist the Russian invasion.

At the summit, the UK promised funding for capabilities including sophisticated air defence systems, drones, and electronic warfare equipment.

UK officials said the new support package “represents the first step in enabling Ukraine to go beyond their valiant defence against the illegal Russian invasion to mounting offensive operations against Russian ground forces in order to restore Ukrainian sovereignty.”

“This military assistance will help them intensify their fight against Russian aggression and ensure they have the defence capabilities they need,” Wallace said.

At the summit, NATO invited Sweden and Finland to join the military alliance and pledged a seven-fold increase from 2023 in combat forces on high alert along its eastern flank against any future Russian attack.

In reaction, Putin said Russia would respond in kind if NATO set up infrastructure in Finland and Sweden.

Russian Deputy Foreign Minister Sergei Ryabkov condemned NATO’s “irresponsible course,” which he said was “ruining the European architecture, or what’s left of it.”

“I have a great deal of doubt as to whether the upcoming period will be calm for our north European neighbors,” he told reporters on June 29.