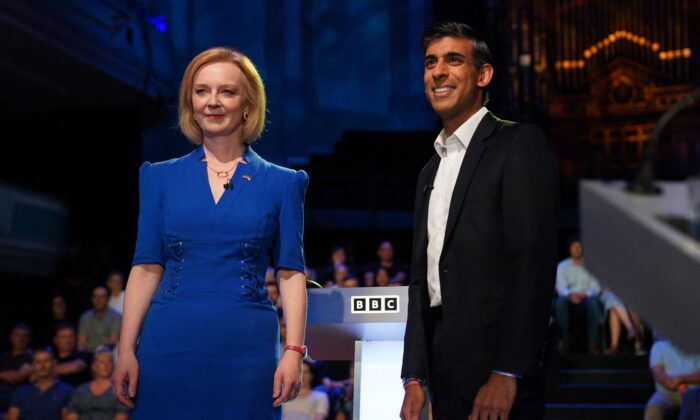 Britain's Foreign Secretary Liz Truss (L) and former chancellor to the exchequer Rishi Sunak, contenders to become the country's next prime minister, arrive to take part in the BBC's 'The UK's Next Prime Minister: The Debate' in Victoria Hall in Stoke-on-Trent, central England, on July 25, 2022. (Jacob King/AFP via Getty Images)
UK

A British cabinet minister says the first draft of the UK Bill of Rights needs a complete overhaul and has urged Liz Truss and Rishi Sunak to send it back to the drawing board.

Welsh Secretary Robert Buckland—who was replaced as Justice Secretary by Dominic Raab when Boris Johnson had a cabinet reshuffle in September last year—wrote, in the Telegraph, that within the bill “are sown the seeds of danger.”

He said: “The scope of the Bill is extremely wide. The sections that purport to elevate certain parts of our existing statute law—for example, trial by jury—as ‘rights’ invite the obvious question: why can’t we have even more rights in this Bill?”

Buckland said: “Already, there is talk about an amendment to create a right to abortion. Whatever people’s views may be about this sensitive subject, Parliament has already legislated for it and its elevation into a ‘right’ risks bringing our courts into the political arena, as in the United States.”

In June the U.S. Supreme Court overturned the Roe v. Wade ruling from 1973, effectively allowing each of the 50 states to ban abortion within their jurisdiction.

Buckland, who was restored to the Cabinet last month in the week Boris Johnson resigned, said there was a danger that left-wingers would seek to add the “right to work” or even the right to receive welfare payments to the bill.

“All these could be tagged on to this ‘Christmas Tree’ Bill, like outsized baubles,” he warned.

Buckland said: “The Bill as currently framed creates some potential hostages to fortune.”

The Bill of Rights was designed to replace the Human Rights Act, which was introduced by the Labour Party under Tony Blair in 1998.

In the Tories’ 2019 general election manifesto they promised to introduce a new bill that would update the law and take into account Britain is no longer part of the European Union and did not need to abide by EU law.

Buckland, who has backed Sunak in the leadership contest, concluded: “Both candidates are rightly committed to reform of Labour’s Human Rights Act. This bill could be improved, however, in order to make sure it delivers on our manifesto commitments.”

But a government spokesman told the Telegraph the bill would not be changed, arguing it makes it easier to deport people and would prevent terrorists from spreading their message in prisons.