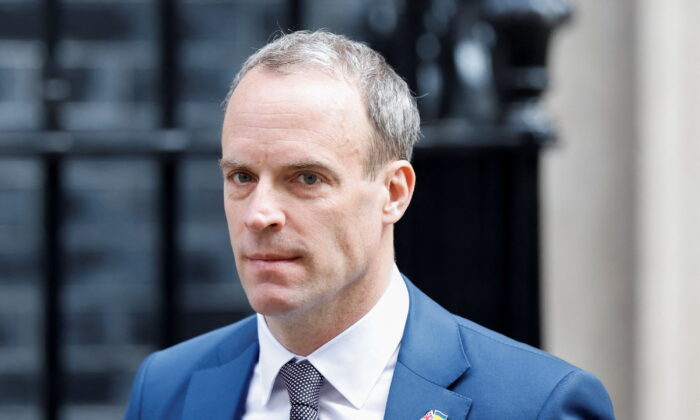 Justice Secretary Dominic Raab has unveiled a Bill of Rights that he claims would overrule decisions made by the European Court of Human Rights, such as the recent interim measure which blocked the deportation of several illegal immigrants to Rwanda.

Raab, who is also the deputy prime minister, says the Bill of Rights—which would supplant the Human Rights Act—would assert that British courts do not have to follow edicts from Strasbourg and the UK Supreme Court in London is the ultimate arbiter on human rights issues.

Raab introduced the proposed Bill of Rights to Parliament on Wednesday, saying it was fulfilling a commitment made in the 2019 Conservative general election manifesto to carry out “human rights reform” following Britain’s departure from the European Union.

He said the new legislation would make it “crystal clear” that it is Parliament that decides policy, not a court in Strasbourg.

But the Bill of Rights was immediately criticised by the opposition Labour Party.

Shadow justice minister Ellie Reeves said: “This is a very dark day for victims of crime, for women, for people in care, for everyone in this country who relies on the state to protect them from harm. This is not a Bill of Rights, it’s a con … it will create endless delays and red tape.”

She said the Rwanda policy was “bungled and unworkable” and the government had attempted to blame someone else, in the form of the European Court of Human Rights, for its failures.

Earlier Raab told LBC: “No one is talking about tearing up human rights in this country. We are staying within the European Convention, we are going to reinforce those quintessentially British rights like free speech. But I do think, when it comes to public protection, people want to see a dose of common sense and balance provided, and that’s what our reforms will achieve.”

No Automatic Right to Appeal in ‘Trivial’ Cases

The Bill of Rights would also boost the freedom of speech and is designed to stop “cancel culture” which prevents people with certain views being given a platform, especially in institutions such as universities.

It would also restrict the right of foreign-born residents with children convicted of crimes in Britain to fight the deportation of their family on the grounds of a “right to family life.”

The Bill of Rights would also remove the automatic right to legal recourse in “trivial” cases and would mean claimants would have to prove they had suffered “significant damage.”

The Ministry of Justice says it will also “insulate the government’s plans to increase the use of prison Separation Centres against legal challenge from extremist offenders claiming ‘a right to socialise.'”