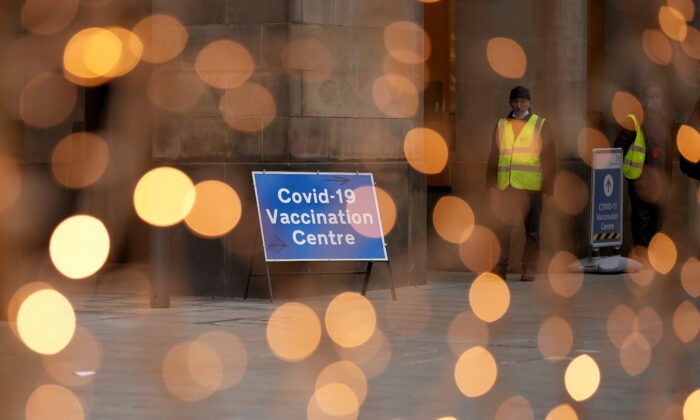 Professor Anthony Harnden, deputy chairman of the Joint Committee on Vaccination and Immunisation (JCVI), said accelerating the booster programme by extending the eligible age range and reducing the interval between the second and booster doses “will be a sensible strategy” as the Omicron variant of the CCP virus was detected in the UK.

Meanwhile, Health Secretary Sajid Javid said he expects to receive new advice “imminently,” within the next couple of days from the JCVI, which is tasked with reviewing whether boosters—currently being given to over-40s—should be extended to all adults.

The JCVI will also consider whether second doses should be offered to 12- to 15-year-olds, and whether the waiting time before a booster jab could be cut short from the currently advised six-month period.

Javid told the BBC that he has “asked the NHS to prepare for much greater capacity” in the vaccination programme.

Also speaking to the BBC, Harnden said he believes “there’s a very good, strong argument for raising the antibody level in the whole of the community.”

“So, accelerating the booster programme, both by extending the age range and by reducing the interval between the second dose and the booster dose, will be a sensible strategy,” he said.

When pushed on whether people aged 18 and over would be invited to get the booster sooner, he added, “Those adults 18-plus will have an offer of a booster earlier than we had previously envisaged.”

In a statement on Nov. 15, the UK’s Health Security Agency (UKHSA) suggested the longer interval between the two initial shots in Canada and the UK correlated with a lower risk of myocarditis, or inflammation of the heart, following the second dose than in countries where people received their second shots sooner.

England will see the return of compulsory mask-wearing in shops and on public transport on Tuesday, the government announced on Saturday, as two cases of the Omicron variant were identified in England.

Travel rules have also been tightened, with lateral flow tests no longer accepted as post-arrival tests.

However, Javid said England is still “nowhere near” reintroducing compulsory social distancing and working from home.

“We know now those types of measures do carry a very heavy price, both economically, socially, in terms of non-COVID health outcomes such as impact on mental health,” the health secretary told Sky News.

“So, if one was to make decisions like that they would have to be done very, very carefully and we’re not there yet, we’re nowhere near that.”

Javid told Sky’s “Trevor Phillips on Sunday” it “would be irresponsible to make guarantees” during the ever-changing pandemic, but said he thinks “people should continue with their plans as normal for Christmas.”

Javid previously said the travel restrictions were introduced as a precaution while experts study the variant to determine whether or not it spreads more easily and can escape immunity.

The Labour Party supported the government’s decision to restrict travel from a number of African countries, and urged the government to also reinstate the requirement for travelers entering the UK to take pre-departure PCR tests.

Dr, Angelique Coetzee, chair of the South African Medical Association and the doctor who discovered the Omicron variant, said the UK is “definitely” overreacting.

Coetzee told the BBC that the symptoms she had seen in South Africa were “extremely mild.”

Asked if the UK was “panicking unnecessarily,” she said, “I think you already have it there in your country and you’re not knowing it, and I would say, yes, at this stage, I would say definitely,” adding the situation may be different two weeks later.

A third case of the new variant was detected in the UK on Sunday. UKHSA said it’s linked to travel to southern Africa and the individual is no longer in the UK.

While in the UK, the individual was in Westminster, central London, UKHSA said, adding targeted testing is being carried out at locations the person visited when they were likely to have been infectious.

Professor Neil Ferguson, a member of the Scientific Advisory Group for Emergencies, said he expects to see “substantially larger numbers” of the Omicron variant in the coming days in the UK, but it will take weeks to become more dominant.

“Even if we had 100 or more cases seeded into the country and even if it is growing quite quickly, it will take really until January for it to reach levels which are anywhere near the levels we’re getting from Delta at the moment,” he said.