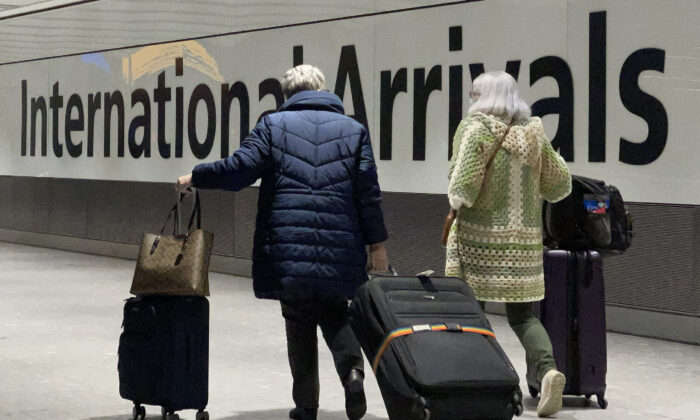 International passengers walk through the arrivals area at Terminal 5 at Heathrow Airport in London on Nov. 26, 2021. (Leon Neal/Getty Images)
WORLD

Two cases of the Omicron COVID-19 variant have been discovered in the UK, Britain’s Department of Health and Social Care (DHSC) said on Saturday.

The cases, which were detected in Nottingham and Essex and are both believed to be connected and linked to travel to southern Africa, were confirmed after genomic sequencing overnight.

The two individuals that have tested positive, as well as all members of their households, are being re-tested and have been told to self-isolate while further testing and contact tracing is underway, the DHSC said.

The department said the UK is “taking decisive action to protect public health” in response to the “developing situation.”

“The UK Health Security Agency is carrying out targeted testing at locations where the positive cases were likely to have been infectious,” it said.

Health Secretary Sajid Javid said: “Thanks to our world-class genomic sequencing, we have been made aware of two UK cases of the Omicron variant. We have moved rapidly and the individuals are self-isolating while contact tracing is ongoing.”

Javid announced that the government is introducing travel restrictions on a further four countries—Malawi, Mozambique, Zambia, and Angola—from Sunday, in addition to South Africa, Botswana, Eswatini, Lesotho, Namibia, and Zimbabwe, which were added to England’s “red list” on Friday.

Anyone that has traveled to these countries in the last 10 days should take PCR tests, he said.

“We will not hesitate to take further action if required,” he said. “This is a stark reminder that we are not yet out of this pandemic.”

Javid told reporters that the UK authorities were “concerned from the moment we first identified this new variant.”

“It’s a deeply concerning new variant and we do need to learn more about it but the fact that we now have these two cases in the United Kingdom does mean we need to take further measures and that’s why I’ve set this out today.”

Javid did not say whether further restrictions could be added in the weeks before Christmas in light of the presence of the new strain, which the World Health Organisation (WHO) has designated a “variant of concern.”

Instead, he said: “We’ve made a lot of progress, we all want to see that protected and if anyone’s sitting at home thinking what can I do? Get vaccinated.”

The UK is the second European nation to have reported the presence of Omicron after Belgium said it had identified a single case on Friday.

Authorities in the Netherlands said that 61 people tested positive for the CCP (Chinese Communist Party) virus arriving on two flights from South Africa on Friday. Further tests are underway to determine if any of them had the Omicron variant.