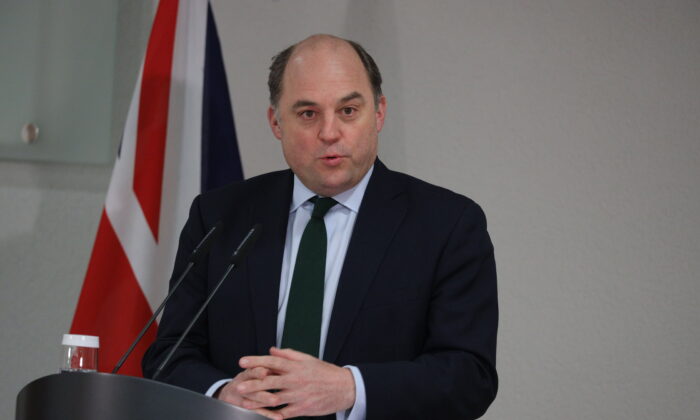 Britain has launched its first ever “Defence Space Strategy,” which outlines how the Ministry of Defence (MoD) will protect the UK’s national interests in space in an era of “ever-growing threats.”

As part of the strategy (pdf) published on Feb. 1, the UK will invest £1.4 billion ($1.9 billion) to bolster the number of British satellites in space.

“This significant investment will help to ensure the UK remains at the forefront of space innovation and one step ahead of our competitors.”

According to the MoD, £968 million ($1.3 billion) will be committed over the next 10 years to deliver a multi-satellite system—known as the ISTARI Programme—to support greater global surveillance and intelligence for military operations.

A further £61 million ($82 million) will explore cutting-edge laser communications technology to deliver data from space to Earth at a speed equivalent to superfast broadband.

The MoD said it is important to “protect and defend the UK’s equities in space and the services derived from space assets,” as space capabilities and activities are “continually subject to threats and hazards” in a “harsh and increasingly competitive domain.”

In addition to natural hazards such as meteoroids and man-made hazards such as space debris, the MoD also highlighted threats from “hostile actors and competitors” who seek to maximise their relative advantage in the domain.

Recent years have seen increasing international rows over satellites, space weaponry, and collisions in orbit, with friction between the United States, China, and Russia.

In a foreword to the strategy, Wallace said space has brought “unprecedented advantages and new threats.”

“Daily life is reliant on space and, for the Armed Forces, space underpins vital, battle-winning technologies,” he said. “Adversaries understand this reliance and are increasingly able to exploit vulnerabilities, threatening our strategic stability and security.”

The space strategy will, according to the MoD, stimulate growth across the sector and support highly skilled jobs across the UK, while also allowing Britain to work more closely with its NATO allies, including the United States.

The newly-announced money is on top of the existing £5 billion ($6.8 billion) already being used to upgrade the UK’s Skynet satellite communications capability, providing strategic communication services to the UK Armed Forces and allies.

The UK Space Command will lead the approach to space defence.

At the official opening of the Space Command in July 2021, Air Chief Marshal Sir Mike Wigston, the head of the Royal Air Force, said China and Russia’s activities in space were “reckless.”

He said the UK sees the two countries’ development of anti-satellite weapons as “a real concern” and wants the international community to call out such behaviour.