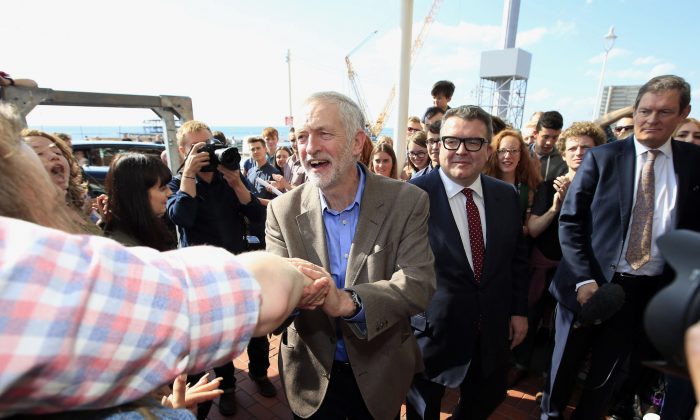 Labour party leader Jeremy Corbyn, centre, is greeted by supporters and the party's deputy leader Tom Watson centre right, upon his arrival, prior to the start of the annual Labour party conference at the Brighton Centre, in Brighton, England, Saturday, Sept. 26, 2015. (Jonathan Brady/PA via AP) UNITED KINGDOM OUT
Europe

LONDON— Could Britain give up the Bomb?

It’s the latest signal that new Labour leader Jeremy Corbyn is prepared to consider policies that were off the agenda for decades, from nationalizing industry to diverging on foreign policy from the United States.

“My views on Trident are very well known,” Corbyn said Sunday, as Labour’s annual conference opened in the seaside resort of Brighton — with a debate on nuclear weapons scheduled for the first time in many years.

“I want us to fulfill our obligations under the Nuclear Nonproliferation Treaty — hence non-renewal of Trident,” he said.

The conference debate is a victory for anti-nuclear activists like Kate Hudson, secretary-general of the Campaign for Nuclear Disarmament, who says a vote to scrap nuclear arms would bring Labour policy “in line with the needs of the age — and of the British people.”

But it’s a source of despair for Labour centrists, who think the party faces electoral oblivion under Corbyn.

“So to make the centerpiece of your first conference a turn towards unilateralism is a resounding signal to the public that you don’t want to be a party of government,” he said.

The divide between pro- and anti-nuclear forces has long been a fault-line in the Labour Party. It was Prime Minister Clement Attlee’s Labour government that developed atomic weapons in the years following World War II, making Britain the world’s third nuclear-armed state after the United States and the Soviet Union.

Every British government since then — Labour, Conservative or coalition — has maintained nuclear weapons. Since the 1990s, Britain’s nuclear deterrent has consisted of four Royal Navy submarines armed with Trident missiles.

Labour briefly adopted a policy of unilateral disarmament under leader Michael Foot, whose election-losing 1983 party manifesto was described by one Labour lawmaker as “the longest suicide note in history.”

New Labour won three consecutive elections from 1997, but the party lost power in 2010 and was trounced by Prime Minister David Cameron’s Conservatives in a May election that focused largely on perceptions of economic competence.

Party members reacted by turning away from Blairism, derided by those on the left as “Tory-lite” policies. This month Labour elected Corbyn, a 66-year-old backbench lawmaker who promises to combine old-school socialism with a new style of politics. He is a sharp critic of Blair-era pro-business economics and international military engagements — notably the 2003 invasion of Iraq — and advocates more grassroots democracy in the party. Corbyn has confirmed that if conference delegates vote to scrap Trident, it will become Labour policy.

That would commit Labour lawmakers to back disarmament when Parliament decides next year how to replace the aging Trident system — a stance many legislators would find hard to stomach.

The outcome of the conference vote is hard to predict. Corbyn is a lifelong opponent of nuclear weapons, but several in his top team disagree. Labour defense spokesman Hilary Benn told the BBC last week that he wanted to see a nuclear-free world, “but I don’t believe for one second that if Britain were to give up its deterrent any other of the nuclear states would give theirs up.”

Trade unions, whose votes carry half the weight at Labour conferences, are also divided, since the defense industry supports thousands of skilled jobs.

“I think the vote outcome is less important than the disagreements it will publicly expose,” he said. “Defense and security has been an issue that the Labour Party has been very, very keen to keep mainstream, certainly since the 1980s.”

Corbyn’s supporters say the nuclear debate is a chance for Labour to embrace a new kind of radical politics that will draw in disillusioned voters.

McTernan and other centrists think it will have the opposite result.

“Having lost an election by being economically incredible, the Labour Party now proposes to be incredible, unbelievable and unsafe on national security,” he said.