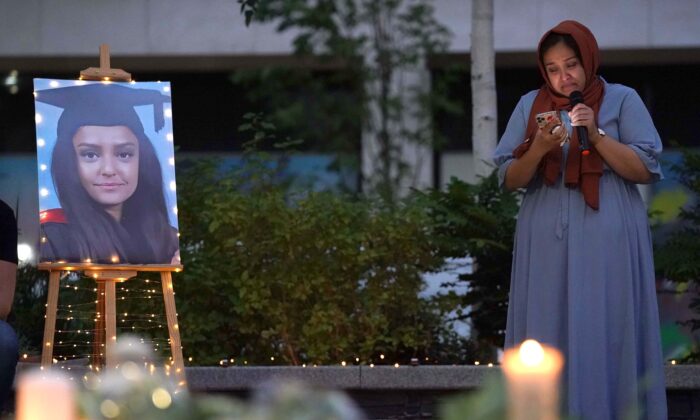 Murderers and other criminals in England and Wales who refuse to appear in court for sentencing could be given longer jail terms under plans unveiled by the government.

Earlier this month a judge criticised Donald Robertson for not having the “courage” to attend any of his trial for the 1987 murder of Shani Warren, and in April Koci Selamaj was lambasted by the family of Sabina Nessa—who he murdered in a park in Kidbrooke, south London, in September 2021—after he refused to leave his cell at Belmarsh Prison to attend his sentencing at the Old Bailey.

The judge who sentenced Selamaj, Mr. Justice Nigel Sweeney, called him a “coward,” but said he had no powers to force him to appear in court.

Justice Minister James Cartlidge told Parliament on Tuesday the government did not think it wise to give judges the power to drag killers into court against their will.

Cartlidge said: “While the presence of defendants may be a comfort to victims, there may be cases where the defendant’s behaviour is distressing to the victims and their families. It’s for that reason we need to take a balanced approach. We are looking at what can be done and one option could be a statutory aggravating factor.”

A new Victims’ Bill unveiled on Wednesday would give crime victims a statutory right to challenge a decision not to prosecute and guarantee they will be informed of the progress of their case throughout the process.

The Justice Secretary, Dominic Raab, also wants prosecutors to meet rape complainants before decisions are made on whether to proceed to trial.

Raab told The Daily Telegraph: “A third of victims withdraw before a prosecution and justice is often done with them feeling let down. That is not good enough and it’s why we’re introducing a duty on prosecutors to meet victims of the most serious cases, like rape, before a case comes to court.”

The bill would also increase the victim surcharge penalty fee—which is paid by convicted criminals—by 20 percent and the money raised, which could be £20 million ($25 million) by 2025, would be used to fund rape support centres.

Victims will be given the right to attend parole board hearings and ask questions when prisoners are considered suitable for release.

In 2019 David McGreavy, who murdered three young children at a house in Worcester in 1973 and impaled their bodies on a spiked fence, was released from prison despite objections from the children’s mother, Elsie Urry.

She told the BBC at the time: “It’s not fair that he’s been released. They said he was going in for life and then they changed it for 20 years, but he hasn’t done 60 years. He took three lives, not just one or two, three … and also, he took my life really.”

Judges presiding over parole board hearings will have to consider the views of the victims before making decisions on releasing murderers and other serious offenders.