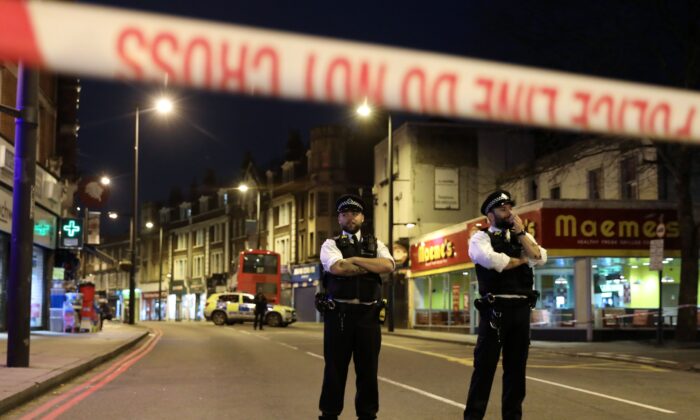 Police officers in Streatham, South London, after at least two people were stabbed in a suspected "terrorist-related" incident on Feb. 2, 2020. (Isabel Infantes/AFP via Getty Images)
UK

The UK government is introducing emergency legislation to prevent convicted terrorists from being automatically released from prison before the end of their sentence, Secretary of State for Justice Robert Buckland announced on Feb. 3.

The Conservative lawmaker said the new legislation is aimed to keep people safe following a terror attack over the weekend in Streatham, South London, that left two people dead and another injured.

Under the new rules, the earliest point at which a convicted terrorist will be considered for release from jail will be once they’ve served two-thirds of their sentence.

The legislation requires that terror offenders aren’t released before they have completed their full jail term unless the parole board agrees.

Buckland said the new legislation will also subject those terror offenders released from prison to “robust safeguards,” and review whether or not the current maximum penalties are “sufficient” for all terrorist offenses.

Sudesh Amman, 20, was released from prison last week after serving just half of his three-year and four-month sentence for 16 counts of distributing extremist material, and for the possession of material likely to be useful for the purposes of preparing a terrorist act.

The parole board had no involvement in Amman’s release as the current law requires automatic unconditional release at the halfway point.

Just days after his release, Amman, an alleged ISIS supporter, stabbed a man and a woman on the busy high street in Streatham on Feb. 2 while wearing what has now been confirmed by officials as a fake explosive device. ISIS claimed responsibility for the attack, which it said in a statement was “in response to calls to attack the citizens of coalition countries.”

The convicted terror offender was being monitored by counter-terrorism officers when he conducted the attack, and was immediately shot dead by officers.

One man in his 40s was initially left in a life-threatening condition following the Feb. 2 attack but officials said he remains in hospital in stable condition.

Following the Feb. 2 attack, London Mayor Sadiq Khan told LBC radio the attack was “preventable and predictable” after the November 2019 London Bridge attack in which convicted terrorist Usman Khan, who had been released from prison on license, killed two people.

“I’m actually angry about the incident yesterday but also, when you add it to the incident in November, what worries me and makes me angry is we’ve got an example of somebody who has been convicted of terrorist-related offenses, somebody who the police had arrested, had been charged and prosecuted.

“And this was clearly an incident that was both preventable and predictable. But for the knife injuries being one each on either side, but for the brilliance and speed of the police, but for the excellence of the medical staff, we could have be having a conversation today about a number of people having lost their lives as a consequence of a terrorist attack that need not have occurred.”

Khan said that governmental changes in 2012 meant judges didn’t have the tools to enforce the “indeterminate sentence to protect the public” and that due to prison cuts, not only are inmates “not being punished and reformed” but instead “further radicalized.”

On Feb. 3, Prime Minister Boris Johnson promised the new legislation would end automatic early release for convicted terrorists but that “the difficulty is how to apply that retrospectively to the cohort of people who currently qualify.”

“We do think it’s time to take action to ensure that people, irrespective of the law we’re bringing in, people in the current stream do not qualify automatically for early release, people convicted of terrorist offenses.”

“I hope people understand that the anomaly we need to clear up is the process by which some people are still coming out under automatic early release without any kind of scrutiny or parole system,” the prime minister added.