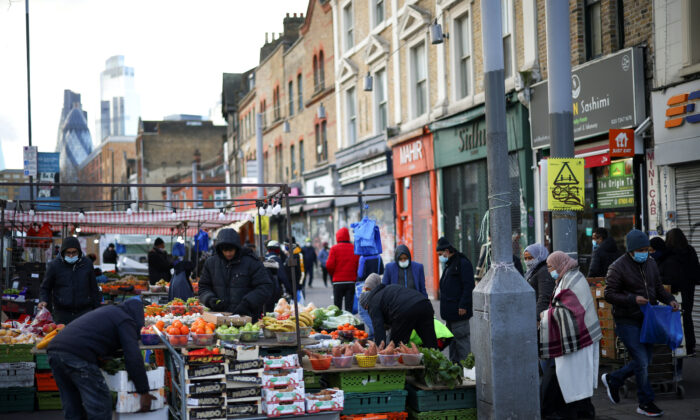 UK Inflation Climbs to Highest Since 1992 at 5.5 Percent

LONDON—British consumer prices rose at the fastest annual pace in nearly 30 years last month, intensifying the squeeze on households and reinforcing the chances that the Bank of England will raise interest rates for a third meeting in a row.

The annual rate of consumer price inflation rose to 5.5 percent in January, the highest since March 1992, when Britain was emerging from a long period of inflation-feeding high wage deals. This was above most economists’ forecasts in a Reuters poll for it to hold at December’s 5.4 percent rate.

Earlier this month the Bank of England predicted inflation will peak at around 7.25 percent in April, when household energy bills are due to rise by more than half.

U.S. consumer price inflation hit a 40-year high of 7.5 percent in January, while inflation in the euro zone was a record 5.1 percent.

The Bank of England (BoE) has already raised rates twice since December—to 0.5 percent from 0.1 percent—and financial markets expect a further increase to 0.75 percent or 1 percent on March 17 after its next meeting.

Two-year British government bond yields hit their highest since 2011 shortly after the inflation data was released.

Financial markets expect BoE interest rates to rise to 2 percent by the end of 2022, though most economists say they will not get close to that level.

“There will probably then be another hike in May taking interest rates to 1.0 percent, but we think that’s where the (BoE) committee will pause as the inflation outlook becomes more benign,” said Thomas Pugh, economist at RSM UK.

The British central bank has said it does not expect inflation to return to its 2 percent target until early in 2024. The bulk of economists think inflation will fall faster.

Markets expect energy prices to fall sharply next year, and there are some signs of easing global supply chain pressures.

But working-age households are facing their biggest annual disposal income squeeze in 30 years—not least because Prime Minister Boris Johnson’s government plans to put up payroll taxes for workers and businesses in April.

The opposition Labour Party—as well as some Conservative lawmakers—have called on the government to scrap the increase.

January’s pick-up in inflation reflected less seasonal discounting by retailers than a year earlier, the Office for National Statistics said.

A record 6.3 percent annual rise in the prices for clothing and footwear added 0.2 percentage points to the CPI rate, while food and drink prices increased by 4.3 percent, the most since April 2013.

Petrol prices were lower than December, but are still 23.6 percent higher than a year earlier, while the cost of second-hand cars was 28.7 percent higher.

Core inflation, which excludes sometimes volatile prices for energy, food, alcohol, and tobacco, rose to 4.4 percent in January from 4.2 percent in December, it’s highest since these records began in 1997.

Retail price inflation—a longer-running series which the ONS says is no longer accurate, but which is used in commercial contracts and to set interest payments for some government bonds—was the highest since March 1991 at 7.8 percent in January.

There were signs of further inflation pressure ahead as manufacturers increased prices by 9.9 percent, the biggest annual jump since September 2008 and above all forecasts in a Reuters poll.

But the surge in manufacturers’ raw material costs slowed slightly, rising by 13.6 percent which was down from 13.8 percent in December and a peak of more than 15 percent in November.