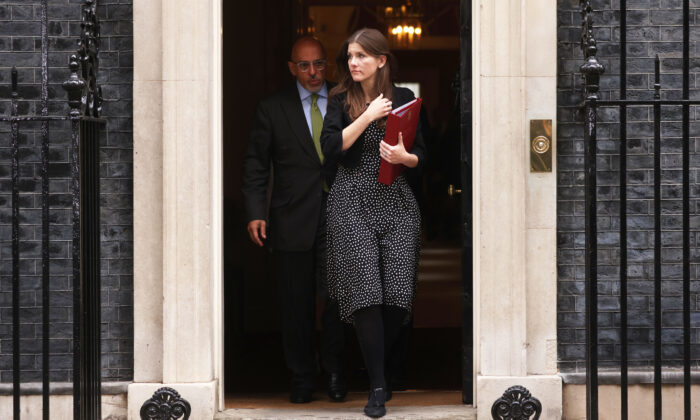 The Minister of State for Universities has written a letter to universities warning them about signing up for equality and diversity schemes that could hamper free speech.

Michelle Donelan told the universities there is growing concern that a “chilling effect” on university campuses leaves students, staff, and academics unable to express “lawful views without fear of repercussion.”

“Free Speech is of the utmost importance. It’s good to see it celebrated and encouraged,” British political advisor, commentator, educator, and columnist Calvin Robinson told The Epoch Times in an email. He joined other free speech advocates in celebrating Donelan for intervening in “lazy” universities that have “accepted mandatory training” of “half-digested political narratives.”

Donelan also added that universities could “potentially be in tension with creating an environment that promotes and protects free speech.”

Donelan questioned whether institutions that are a member of The Race Equality Charter operated by Advance AE, are places where free speech and academic freedom can flourish.

Advance HE is a publicly funded organisation playing the role of a “single sector agency for equality and diversity, learning and teaching, and leadership and governance in higher education.”

“One of the areas which has come to my attention as potentially being in tension with creating an environment that promotes and protects free speech is university membership and participation in external assurance and benchmarking diversity schemes,” wrote Donelan.

The letter was sent out as the Higher Education (Freedom of Speech) Bill is being discussed in Parliament. This legislation will require universities and colleges to defend free speech and help stamp out the unlawful “silencing” and will give a higher education regulator the power to impose fines on institutions if they breach this condition.

The legislation was introduced by the Conservative government in May 2021. It has passed the House of Commons and is presently in its second reading before the House of Lords.

The MP added that The Race Equality Charter has “recently been the subject of attention from MPs and the media, but there are of course a number of other, similar, schemes, and this letter invites careful consideration in respect of all these.”

LGBTQ+ charity Stonewall Diversity Champions scheme is another such scheme.  For example, last December, University College London (UCL) cut ties with the scheme as some raised academic free speech issues while “recognising that a formal institutional commitment to Stonewall may have the effect of inhibiting academic work and discussion within UCL about sex and gender identity.”

“Universities and other HE [higher education] providers are autonomous institutions, and the decision over whether or not to join external assurance and benchmarking diversity schemes is up to each individual provider,” said Donelan.

“Given the importance of creating an HE environment in which free speech and academic freedom can flourish, I would like to ask you to reflect carefully as to whether your continued membership of such schemes is conducive to establishing such an environment,” she added.

“Michelle Donelan is right to challenge universities on this, protecting the free speech of both students and tutors is paramount. University should be a place safe to debate different ideas and perspectives,” said Robinson, who also is part of Don’t Divide Us, an organisation set up to take a stand against the UK’s “divisive obsession with people’s racial identity.”

“The next step would be to take on this woke indoctrination and ensure lobbyist groups aren’t able to penetrate education with their contested ideologies,” he added.

Don’t Divide Us outlined in a report that it believed that Advance HE’s Race Equality Charter is more likely to promote division than the worthy aim of equality on campus.

Dr. Alka Sehgal Cuthbert, head of education strategy for Don’t Divide Us, told The Epoch Times, that Donelan’s letter was a “welcome intervention,” and said that Advance HE has not taken up their offer of debate.

“These guidances that have come in under the banner of anti-racism, sometimes they are well-intentioned, but the point is that they have very negative consequences. People are beginning to notice that,” she said.

A spokesman for Advance HE told The Epoch Times that “freedom of speech and academic freedom are core principles of higher education” and these “must be protected.”

“Autonomous institutions must be able to make their own decisions about tackling racism and fostering inclusivity and this includes whether they wish to engage with the Race Equality Charity (REC),” he wrote.

“The REC is about supporting inclusion and belonging and the success of Black, Asian and minority ethnic staff and students, enhancing their voice and input, and therefore the freedom of speech of an institution overall, so they are complementary aims. There are many ways to address racism and we recognise some of these are contested. The REC is a voluntary framework which supports participants in developing approaches to EDI to meet their own context,” he added.

Firing a Big Shot in the Culture Wars

Professor Dennis Hayes, president of Academics for Academics Freedom (AFAF), told The Epoch Times by email that Michelle Donelan has been accused of “firing a big shot in the culture wars.”

AFAF maintains The Banned List, which is a list of academics, and others, who have faced attempts to censor them or ban them from campus.

“Universities, by imposing political viewpoints on their staff, have kicked off the culture wars but do not even recognise this. They only call out only those who fight back,” he said.

Hayes explained that this has “mostly, but not entirely happened” because universities have “been lazy and have bought into commercial training and online modules that involve half-digested political narratives.”

“Staff are then presented with the demand that they undertake and accept ‘mandatory’ training in these without any question,” he said, adding that the diet university staff are fed includes “critical race ‘theory,’ unconscious bias training, decolonisation, intersectionality, understanding gender identity, and on and on.”

He said that the solution for universities in response to Donelan’s challenge is “simple.”

“It has long been AFAF’s view that all controversial topics, such as those in the list above, should be engaged with through debate and discussion,” he said.

“Talk about any topic you like but make sure arguments for and against are made and are open to discussion. That would mean that universities would have to do some intellectual work to move back towards being educational rather than training institutions. But surely, no university could be against vigorous, critical debate about any topic?” added Hayes.