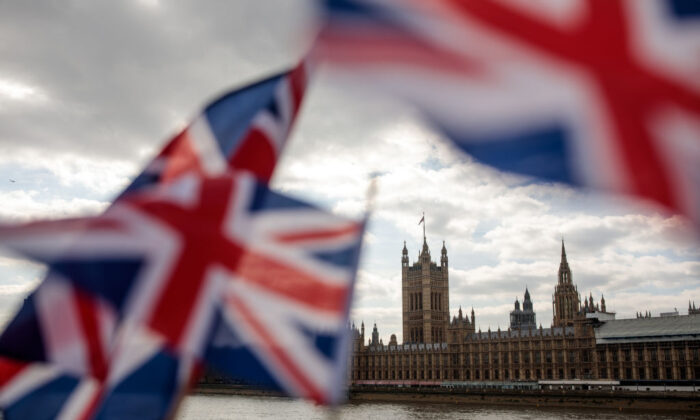 Union Jack flags flutter in the wind in front of the Houses of Parliament in London on March 26, 2019. (Jack Taylor/Getty Images)
Chinese Regime

“We heard alarming evidence,” according to a report from the House of Commons’ Foreign Affairs Committee published on Nov. 5.

Among the examples cited was an incident recounted by Christopher Hughes, a professor of international relations at the London School of Economics.

“I have seen patriotic Chinese students in Trafalgar Square in London, because I went along to look at the Hong Kong demonstration, and I would say it was more like a hate crime. … it was really intimidating and threatening,” he told British lawmakers at a Sept. 3 parliament hearing.

Chinese state media have promulgated the narrative that ongoing Hong Kong protests are a separatist movement fomented by Western countries. In recent months, many mainland Chinese studying abroad in the West have lashed out at local supporters of Hong Kong protests—harassing and sometimes physically attacking them.

Hughes added: “It is that kind of activity where there are clear links of direction from the [Chinese] consulate.”

In Hong Kong, mass protests against Beijing’s encroachment on the city’s autonomy are now in their fifth consecutive month, as protesters demand that the city government fulfill their demands for greater democracy. Overseas, Hongkongers and supporters have held rallies in cities around the world.

Hughes also mentioned an occasion when Confucius Institute officials confiscated papers and tore out all the pages that mentioned Taiwan at an academic conference in Portugal, so that other academics wouldn’t see them.

Beijing considers Taiwan part of its territory, although it’s a self-ruled island with its own democratically elected government, military, and currency. It has thus sought to undermine Taiwan’s international standing.

According to a study published by the U.S. Senate’s subcommittee on investigations, the Chinese regime has channeled more than $158 million to fund Confucius Institutes in the United States since 2006. The study found that Beijing controls every aspect of the institutes, including funding, hiring of staff, and programming.

Beijing has established more than 100 Confucius Institutes at U.S. schools, while there are at least 29 in the UK.

CSSAs are groups for international Chinese students, of which there are now over 100,000 in the UK. They also exist at virtually all U.S. universities that have enrolled Chinese students, with the associations receiving their funding from local Chinese consulates.

In another example, Ayeshagul Nur Ibrahim, a Uyghur Muslim studying in the UK, recounted how Chinese authorities began monitoring and harassing her family in China after she became involved in human rights advocacy for Uyghurs under suppression in the Xinjiang region.

At the University of Nottingham, Chinese officials pressured managers at the school to cancel events related to Tibet and Taiwan, according to the report. Tibet has been heavily suppressed by Chinese authorities, and Tibetan religious leader Dalai Lama currently lives in exile.

The report also cited SOAS University of London professor Steve Tsang, who spoke about witnessing different university officials being pressured by the Chinese embassy to cancel an event or stop an academic from making political comments about China.

When asked about the report, China’s Foreign Ministry spokesperson Geng Shuang, at a daily briefing on Nov. 7, suggested that people were seeking to sow “discord by promoting baseless conspiracy theories.”

In March, Human Rights Watch published a 12-point code of conduct for institutes of higher education around the world that are trying to combat Chinese influence.

One of the 12 points was to reject Confucius Institutes. It stated: “They are fundamentally incompatible with a robust commitment to academic freedom.”

Sophie Richardson, China director at Human Rights Watch, said in a statement: “Colleges and universities that stand together are better equipped to resist Chinese government harassment and surveillance on campuses, visa denials, and pressures to censor or self-censor.”