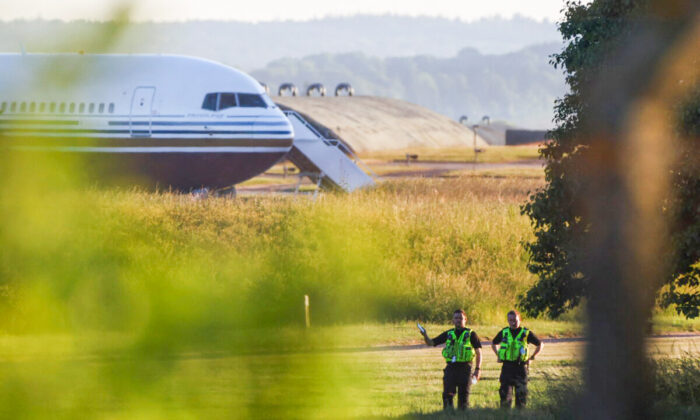 Police officers stand near a plane reported by British media to be first to transport illegal immigrants to Rwanda at MoD Boscombe Down base in Wiltshire, Britain, on June 14, 2022. (Hannah McKay /Reuters)
UK

Downing Street has confirmed the government will carry on with the Home Office plan to send illegal immigrants who have crossed the English Channel to Rwanda, despite Boris Johnson’s resignation as prime minister on Thursday.

The prime minister’s official spokesman said on Friday: “This is a pre-agreed government policy. Convention doesn’t prevent or preclude government from seeking to fulfil that policy and that would include defending cases in court as required.”

A legal challenge to the policy is due to be heard in the High Court in London on July 19 but Downing Street says they might try to get a plane full of illegal immigrants sent to the east African country before that date.

Home Secretary Priti Patel—one of the few government ministers who did not resign during a tumultuous week in British politics—signed what she called a “world-first” agreement with Rwanda in April.

The plan was not only to send the cross-channel illegal immigrants to Rwanda while their asylum applications were considered but to leave them there if they were unsuccessful.

A chartered Boeing 767 to Rwanda was due to take off on June 14 but it was halted at the last moment when the European Court of Human Rights issued an “interim measure,” which effectively scuppered the flight.

That infuriated Patel and many Conservative MPs, some of whom have demanded the government withdraws from the European Court of Human Rights.

It is unclear if any of the leading candidates for the leadership—Rishi Sunak, Sajid Javid, Liz Truss, Ben Wallace, and Tom Tugendhat—would ditch the policy, which was described by the Archbishop of Canterbury, Justin Welby, as “ungodly” in his Easter sermon.

Johnson will remain as prime minister until the beginning of September, by when the Conservative Party will have chosen a new leader, who can replace him.

While he remains a caretaker prime minister, he has promised not to push through any new policies but he remains committed to the Rwanda plan.

Steve Valdez-Symonds, from Amnesty International UK, has urged the government to rethink the plan and said: “The UK government is so far removed from reality and lacking in humanity that they are not only destroying the asylum system but also people’s lives.”

More than 13,000 people have arrived in England this year after crossing the English Channel from France.

Earlier this week a massive operation overseen by Eurojust, and involving Britain’s National Crime Agency, led to 40 arrests and claimed to have smashed a major cross-channel people-smuggling ring.