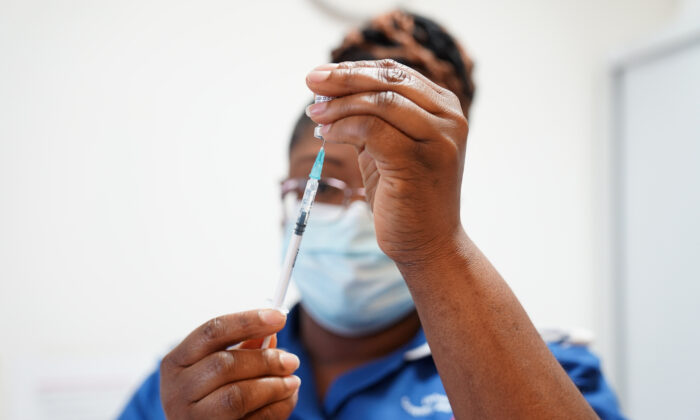 A nurse prepares a dose of a COVID-19 vaccine in Coventry, England, on April 22, 2022. (Jacob King - WPA Pool/Getty Images)
By Zachary Stieber

People under 50 without conditions that put them at risk of contracting COVID-19 will soon be unable to get a COVID-19 booster, the UK government announced on Jan. 25.

Uptake in the under-50 population has been extremely low since early 2022 and the government is accepting a recommendation from the Joint Committee on Vaccination and Immunisation (JCVI) to end the booster campaign for most of the age group.

The booster availability to healthy individuals in the age group will end in the UK on Feb. 12, the government said.

National Health Service (NHS) official Steve Russell said that people should get their booster before the availability ends.

A smaller-scale effort will see people who fit certain criteria, including having compromised immune systems, still able to get boosters beyond the Feb. 12 date.

Health officials have also accepted the recommendation to end the availability of the initial vaccination, or a primary series, for the population not at clinical risk subject to further consideration, according to UK Health Minister Maria Caulfield.

“The JCVI’s advice to target the initial vaccination (primary course) offer to those at higher risk from Covid-19 has been accepted  … subject to further consideration of timings,” she said in a statement.

No date has been given as of yet for the end of the primary series campaign. The JCVI recommended that it be ended before the end of 2023, narrowing the targets to “those persons at higher risk of severe COVID-19,” including individuals aged 12 to 49 who are household contacts of immune-suppressed people.

Most children in the UK are already unable to get a booster or primary series.

The JCVI said that the change in vaccine availability stems from the high levels of immunity acquired through vaccination and infection as well as the lower severity of cases that Omicron and its subvariants cause when compared to earlier strains.

“Based on the current data, keeping the booster (third dose) offer open to these groups is considered of limited ongoing value and the overall impact on vaccine coverage is negligible,” the committee said.

Officials also noted that after an initial high uptake of a booster, or third dose, in December 2021, uptake has been low, at less than 0.1 percent per week since April 2022 in all people under 50 who are eligible for a booster.

The vast majority of people aged 12 and older have received a primary series, but booster uptake has been much less prevalent, especially among younger people. Of those aged 50 and up, the older a person was, the more likely they were to get a booster as part of a campaign launched in the fall of 2022. More than 8 out of 10 people aged 75 or older, for instance, received a booster, compared to just 42.4 percent of those aged 50 to 54.

Other developed countries have also seen enthusiasm for the vaccines lag as a growing body of evidence shows that their effects are worse initially against the newer variants that have emerged and that the protection quickly wanes, especially against infection. Some studies have indicated that the vaccinated are more likely to get infected after a period of time.

Based on advice from the JCVI, an independent committee that advises the government on vaccines, the government will focus on vaccinating and boosting the elderly as well as people with compromised immune systems.

“The COVID-19 vaccination programme continues to reduce severe disease across the population, while helping to protect the [National Health Service],” JCVI Chair of COVID-19 immunization Wei Shen Lim said in a statement. “That is why we have advised planning for further booster vaccines for persons at higher risk of serious illness through an autumn booster programme later this year.”

The United States has continued its aggressive vaccination campaign, promoting both the primary series and multiple boosters to most of the population. Even infants and babies are advised to get three doses.

Some other countries, in addition to the UK, have gradually eased up on vaccines.

Denmark’s government, for instance, announced in September 2022 that it would stop offering boosters to people under 50.

The calculus was different for older people. For all people aged 70 or higher, for instance, the figure was 800.

Authorities didn’t provide calculations for how many adverse events tens of thousands of vaccinations would cause. The Pfizer and Moderna vaccines have been documented to cause heart inflammation and other side effects, including severe allergic shock.

Dr. Aseem Malhotra, a British cardiologist who has called for the withdrawal of the Pfizer and Moderna vaccines, hailed the end of the booster campaign for many.

“But this alone is not good enough. We must help the vaccine injured & make the government, the regulator & Pharma fully accountable,” he wrote on Twitter.