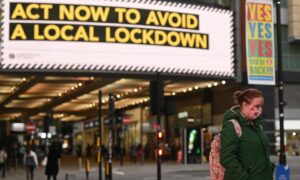 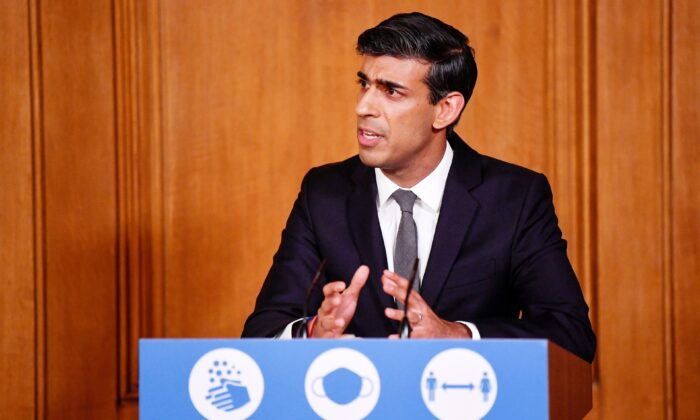 The UK Chancellor of the Exchequer on Thursday announced another round of expansions to his support schemes, in an effort to alleviate financial difficulties caused by the restrictions imposed to curb the spread of the CCP virus.

The new expansions come as the broader Coronavirus Job Retention Scheme, which has been paying 80 percent of the wages of around 9.6 million people since March, winds up at the end of October.

Regional governments and opponents have said the replacement support packages for November onwards—announced on Sept. 24 and topped-up on Oct. 9—are not enough to keep workers and businesses going, as the country moves to a new wave of tiered local lockdowns.

Chancellor Rishi Sunak, who had previously resisted calls to increase the government’s support schemes, said on Thursday that hospitality businesses in Tier 2 areas, though not required to close, are hit harder “than they had hoped” due to plummeting demand.

He said the government is going further as “the situation demands”.

The Job Support Scheme coming into effect on Nov. 1, designed to prevent redundancies by helping to pay workers two-thirds of their wages for hours not worked, originally required employees to work at least a third of their normal hours, and their employers to contribute a third of the payment.

According to the new announcement, workers are required to work only one fifth of their normal hours, and the employers’ contribution is reduced to 5 percent.

The Self-Employment Income Support Scheme (SEISS) will pay 40 percent of average trading profits to self-employed workers affected by the pandemic, doubling the original offer. The SEISS grant will be paid in a lump sum covering the three months from November to January, with the possibility of a second payment for the three months after.

Under a new grant scheme to support businesses in Tier 2 areas, the government will provide local authorities with “enough funding to give every business premises in the hospitality, leisure, and accommodation sectors a direct grant worth up to 2,100 pounds [$2,747] for every month Tier 2 restrictions apply,” Sunak told Parliament.

“These grants will be retrospective,” Sunak said. “Businesses in any area, which has been under enhanced restrictions, can backdate their grants to August.”

Local authorities will have the power to distribute the grants according to local needs.

In Tier 3 areas, where most of these business are required to close, businesses had been offered 3,000 pounds every month.

Sunak said the new multi-billion pound support package came “on top of over 200 billion pounds of support” the government had provided since March.

Dodds blamed the loss of “over a million” jobs on the government’s “inaction”, and urged the government again to impose a national circuit-breaker lockdown to stem the spread of the CCP (Chinese Communist Party) virus.

Sunak defended the government’s tiered approach. He said “there is no easy cost-free answer” to the problems, and the government is doing everything it can “to strike that balance between saving lives and protecting livelihoods”.

According to the latest figures from the Office for National Statistics (ONS), Britain’s unemployment figures rose to 4.5 percent in August.

Chief economist at accounting experts Deloitte Ian Stewart has said that the “higher case rate, new restrictions, and less government support are likely to push unemployment up over the winter months”.

Other ONS data showed the UK’s public debt has reached to almost 2.06 trillion pounds at the end of September, or around 103.5 percent of the country’s GDP.

“This was the highest debt to GDP ratio since the financial year ending (FYE) 1960,” ONS said.