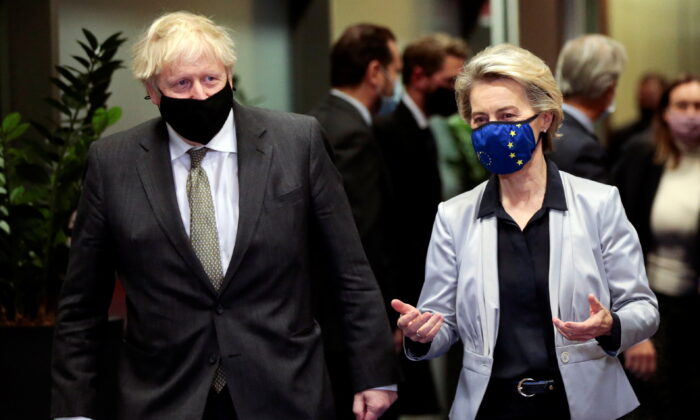 “We had a lively and interesting discussion on the state of play across the list of outstanding issues. We gained a clear understanding of each other’s positions. They remain far apart,” the two leaders said in a joint statement after their talks over dinner at the headquarters of the European Commission.

We had a lively & interesting discussion on the state of play on outstanding issues.

We understand each other’s positions. They remain far apart.

The teams should immediately reconvene to try to resolve these issues. We will come to a decision by the end of the weekend. pic.twitter.com/jG0Mfg35YX

“We agreed that the teams should immediately reconvene to try to resolve these essential issues. We will come to a decision by the end of the weekend,” the statement said.

There had been hopes of “positive momentum” on Tuesday after Britain dropped contentious clauses from its Internal Market Bill, which, if kept, would have breached the Brexit Withdrawal Agreement.

But earlier on Wednesday, both UK and EU leaders reiterated their respective positions and showed no willingness to compromise.

Speaking at the Prime Minister’s Questions in Parliament, Johnson said, “A good deal is still there to be done” but the EU must soften its position on the issues of a “level playing field” and fishing rights.

German Chancellor Angela Merkel said “there is still the chance of an agreement” but stressed that the EU would not compromise on its core principles.

“If there are conditions from the British side which we cannot accept, we are prepared to go down a road, which is without an exit agreement,” she told the German parliament.

The UK officially left the EU in January but the trading arrangements—such as tariffs and quotas—have remained unchanged during the Brexit transition period, which will end on Dec. 31.

If no trade deal with the EU is reached by then, Britain will default to trading with the 27 EU countries under World Trade Organisation (WTO) rules.

British business groups have warned that a no-deal Brexit would disrupt trading routes and cause prices of essential goods to rise.

The Food and Drink Federation (FDF) told Parliament on Tuesday that the UK’s food supply chain could face disruption when the Brexit transition period ends.

Lily Zhou, Reuters, and The Associated Press contributed to this report.