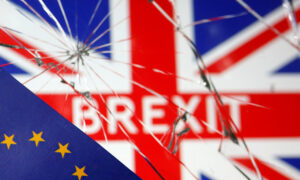 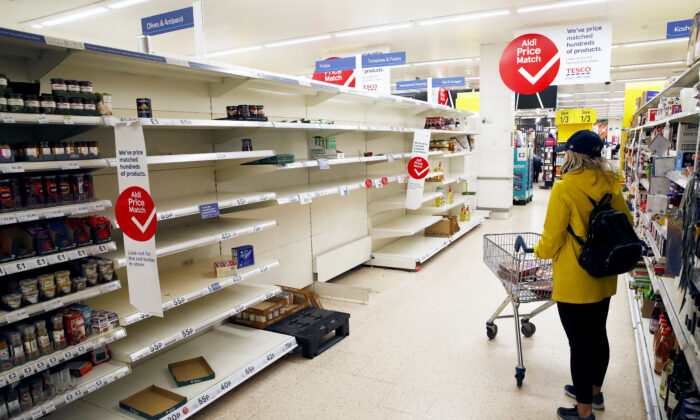 A lone shopper looks at empty shelves in a supermarket in Manchester, England, on March 18, 2020. (Clive Brunskill/Getty Images)
UK

The food supply chain could face disruption in the UK, and especially in Northern Ireland, after the New Year when the Brexit transition period ends, an industry leader has warned.

Around 40 percent of food in the UK is imported on average across the year, but the number is probably “significantly north of 60 percent” at the moment due to the season, Ian Wright, CEO of the Food and Drink Federation (FDF), told MPs on Tuesday.

“If you said that now 60 percent of our food is imported, … somewhere north of 50 percent would be perishable,” Wright said during a Business, Energy, and Industrial Strategy Committee hearing.

He added that two-thirds of the imported food comes from the European Union, with Ireland being the largest single player.

Wright told the MPs two reasons are causing uncertainty about the movement of food from the EU to the UK—border checks and tariffs.

Not knowing if there will be tariffs, or how much they would be, 14 days before the end of the Brexit transition period brings great uncertainty, he said, because it can dictate whether the operators will trade.

“So my members will not know whether they’re exporting their products after Jan. 1, or whether they’ll be able to afford to import them and charge the price that the tariffs will dictate,” he said. The FDF represents 7,500 food and drink manufacturers.

Not knowing how border checks will be carried out also impedes businesses’ ability to plan ahead.

While these two factors affect all import and export industries, the food and drinks industry, whose imports are mostly perishable, has to deal with another “completely unique” problem caused by delays across container ports and the CCP virus pandemic.

“For us, this is all about lorries with the right paperwork getting in through a particularly small number of ports, through Calais and the Channel Tunnel, [where] more than 10 percent of our food … comes every day,” he said.

Therefore, if one lorry driver is not prepared, the delay will affect everyone after that.

With current delays due to the CCP (Chinese Communist Party) virus, “even ambient food is arriving so late that some of it is potentially going to go out of time,” Wright said.

Wright called the Northern Ireland protocol (pdf) “a complete shambles” as he explained why he thinks these problems will affect trade with Northern Ireland much more than with France and other EU countries.

“I’m pretty confident that Kent and Operation Brock will work reasonably well. I expect that to be a sort of 85 to 90 percent success,” he said, referring to a traffic management system design for a no-deal Brexit.

“I’m far less confident about what happens at Stranraer, or Holyhead, or the other ports serving Northern Ireland.”

This means, Wright said, after Jan. 1, “everybody [in the UK] doing business in Northern Ireland is in effect exporting to the EU, many of them for the first time.”

According to Wright, an FDF survey last week found that 43 percent of the UK manufacturers “who supply Northern Ireland said they weren’t going to do so in the first three months.”

Chancellor of the Duchy of Lancaster Michael Gove on Wednesday said that the border checks in Northern Ireland will be minimal.

“The will be a small number of proportional checks on food products when they go into Northern Ireland,” Gove told the Telegraph.

“We’ve already invested, along with the Northern Ireland Executive, in making sure that these checks can be as light touch as possible. ”

Gove also said that the government managed to negotiate the removal of “many of the other concerns that businesses in Northern Ireland had about the protocol,” without specifying which ones.

“And that means that businesses in Northern Ireland have the opportunity to enjoy the best of both worlds: access to the European single market because there’s no infrastructure on the island of Ireland, and at the same time, unfettered access to the rest of the UK market.”

There had been fear that British sausages will be banned in Northern Ireland, because EU rules require imported meat to be frozen, not fresh or chilled.

Gove said the government had secured an agreement with the EU that ensures Northern Irish residents can continue to buy sausages from Britain.

“And that means that some of the disruption, which people feared might occur after the end of the transition period won’t occur,” Gove said.

Apart from issues caused by Brexit, shortage of storage places is a problem for the industry as well.

MPs were told that there is a shortage of both general warehousing space and cold storage in Great Britain and Northern Ireland due to the slowdown of property development after 2008.

“I think it’s probably a bit easier to stop our exports over the other side of the channel. I think a number of businesses will have done that,” Wright said.

He said FDF members, including “quite big companies,” had seen a regular loss of export orders over the past six to eight weeks.

“At the moment it’s in the low single digits. But the problem is, if there is any disruption to supply, you lose your customer pretty quickly, and you do not get them back.”

This year, the food and drinks industry will also suffer from the loss of Christmas trade and diminished sales to the hospitality sector because of the CCP virus pandemic.

The period between Halloween and Chinese New Year normally accounts for about 60 to 80 percent of the industry’s annual profit, Wright said.

“Halloween has been a bigger deal in hospitality and celebratory food than on New Year’s Eve. So, you know, we’ve already lost out on the first part of our biggest earner, and that will continue, I suspect, because Christmas is not going to be anything like as recognizable,” he told MPs.

Explaining why the sector is affected by the pandemic even though it is one of the few industries that continued working during the lockdowns, Wright said the issue is profit margin.

Apart from retail through supermarkets and convenience stores, 30 percent of food and drink products go to the “away from home” part of the sector, including hospitality, contract catering, and food-to-go places such as sandwich shops.

“That is the higher margin part of the business,” which had been decimated by the pandemic, Wright said.

He gave an example of a very large international business that normally has about 60 percent of its business in retail and 40 percent in “away from home”—which is more profitable.

“The retail business is up very low single digits on the year. The away from home is less than 5 percent of its business this time last year,” he said, “and no business, even the most brilliantly organized, and wonderfully funded business, can kind of absorb those sorts of shocks without a massive hit to profitability.”

Wright told MPs that he hopes the UK wouldn’t lose “many, many businesses,” but food manufacturers serving only at the hospitality sector are “very, very, very precarious.”