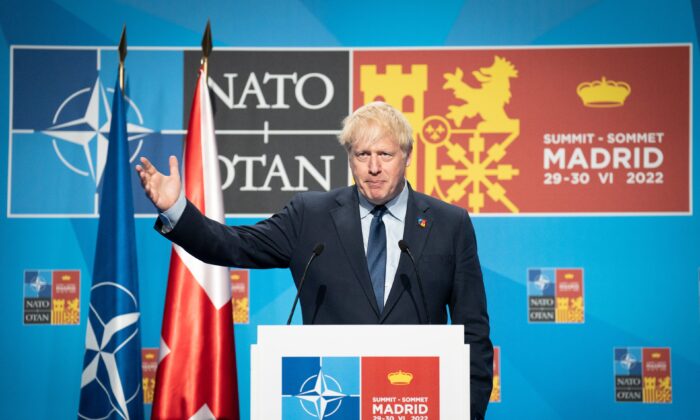 UK Defence Spending to Rise to 2.5 Percent of GDP by the End of This Decade: Johnson

Britain will increasing its defence spending to 2.5 percent of GDP by the end of the decade, Prime Minister Boris Johnson has announced.

The pledge could amount to an extra £55.1 billion ($67 billion) cumulatively over the rest of the decade in order to reach the 2.5 percent goal in 2030, based on forecasts of the size of the economy by the Office for Budget Responsibility.

Speaking as the NATO summit in Madrid drew to a close on June 30, the prime minister said: “We need to invest for the long term in vital capabilities like future combat air whilst simultaneously adapting to a more dangerous and more competitive world.

“The logical conclusion of the investments on which we propose to embark, these decisions, is that we’ll reach 2.5 percent of GDP on defence by the end of the decade.”

Johnson said the “cost of freedom” is “always worth paying,” citing the economic shock caused by Russian President Vladimir Putin’s invasion of Ukraine.

“Unless we get the right result in Ukraine, Putin will be in a position to commit further acts of aggression against other parts of the former Soviet Union more or less with impunity,” he said. “That will drive further global uncertainty, further oil shocks, further panics, and more economic distress for the whole world.”

The UK is counting its support for Ukraine’s resistance within its defence spending, taking the current level to around 2.3 percent of GDP.

At the summit, Johnson announced a further £1 billion ($1.2 billion) in military aid to Ukraine, a significant increase on the £1.3 billion of military assistance already provided.

‘Too Little Too Late’

Johnson’s promise to increase the defence budget was made after he came under pressure from senior Cabinet ministers and military chiefs to boost defence spending.

Defence Secretary Ben Wallace said on June 28 that the UK needs to boost its investment in defence before it is too late.

But Johnson’s new pledge has failed to silence critics.

Tobias Ellwood, a Conservative MP who chairs the Defence Select Committee of the House of Commons, said it is “too little, too late.”

He also condemned Johnson for going ahead with planned cuts to the size of the British army, writing on Twitter, “This is NOT the time to cut the Army by 10,000.”

Julian Lewis, a Conservative MP who chairs Parliament’s Intelligence and Security Committee, described the spending increase as “feeble,” accusing the prime minister of “an inability or unwillingness to face up to the gravity of the current crisis.”