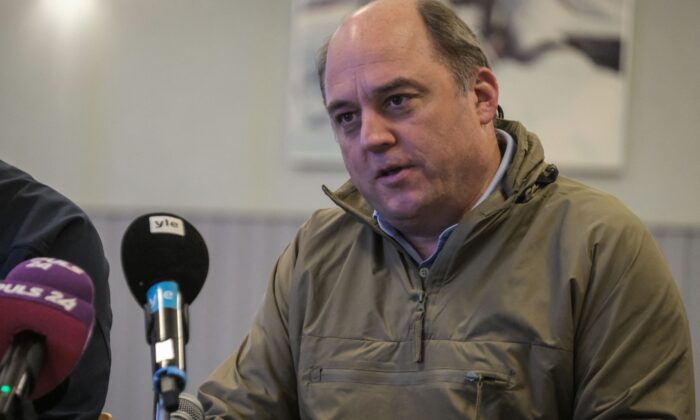 Britain's Defence Secretary Ben Wallace attends a press conference of the exercise Arrow 22 at the Niinisalo garrison in Kankaanpaeae, Finland, on May 4, 2022. (Alessandro Rampazzo /AFP via Getty Images)
UK

UK Defence Secretary Ben Wallace made a secret visit to Kyiv to hold discussions with President Volodymyr Zelenskyy on providing further military aid to Ukraine, the Ministry of Defence (MoD) has said.

The purpose of the visit, which took place earlier this week, was for Wallace to “hear first-hand how the operational needs of Ukraine’s Armed Forces are developing as the nature of the conflict continues to change,” the MoD said in a statement issued on June 10.

The UK wants to make sure its continued military support “is evolving to meet those requirements and is tailored to the situation on the ground,” said the statement.

The president replies: “We do it together.”

Wallace agreed with Zelenskyy and Ukraine’s Defence Minister Oleksii Reznikov to “work even more closely going forward in support of their shared goal of enabling Ukraine to liberate itself from illegal Russian occupation,” the MoD said.

They also discussed the range of equipment and training the UK is currently providing, and what further support it can offer to help Ukrainian forces to resist the Russian invasion, it added.

The UK has become one of Ukraine’s most important allies in the country’s resistance against the Russian invasion, providing both advanced weaponry and humanitarian aid.

Britain was the first European country to send lethal aid to Ukraine and has sent military aid worth more than £750 million ($924 million), including thousands of anti-tank missiles, air defence systems, and armoured vehicles, according to the government.

On May 7, the UK government pledged £1.3 billion ($1.6 billion) worth of further military support to Ukraine.

The UK recently announced it would gift M270 multiple-launch rocket systems (MLRS) to Ukrainian forces to help them defend themselves from Russian long-range artillery.

After Prime Minister Boris Johnson survived a vote of confidence within the ruling Conservative Party on June 6, Zelenskyy said he was “very happy” about the result as “Boris Johnson is a true friend of Ukraine.”

A Downing Street spokesman reacted by saying: “The prime minister enjoys a very close relationship with President Zelenskyy. He believes it is vital to how the UK is able to adapt and support Ukraine in this fast-moving situation.”

The relationship “benefits both the Ukrainian people in being able to be responsive to the support they need but also to ensure the UK is at the forefront of providing that support,” he said.