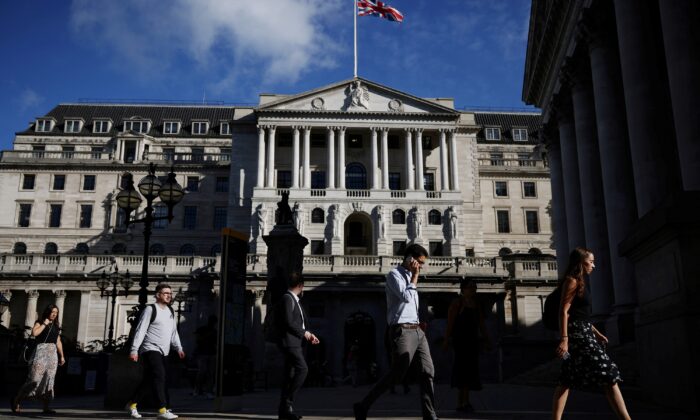 People walk past the Bank of England during morning rush hour, in London, on July 29, 2021. (Henry Nicholls/Reuters)
Recession

The Bank of England, the UK’s central bank, has announced it will raise interest rates to their highest in more than 13 years and indicated it believes the economy is already in recession.

The Bank’s Monetary Policy Committee (MPC) has raised rates from 1.75 to 2.25 percent—the highest since November 2008—in an effort to control inflation, which currently stands at 9.9 percent.

The committee said the “tight labour with wage growth and domestic inflation” above targets called for a “forceful response.”

But the hike was less drastic than the 0.75 percentage points announced by the U.S. Federal Reserve on Wednesday.

The 0.5 percentage point increase was decided after five members of the nine-strong MPC voted for it, including Governor of the Bank of England, Andrew Bailey.

Three members—Jonathan Haskel, Catherine Mann, and Dave Ramsden—voted in favour of a 0.75 percentage point rise in line with the decision by the U.S. Federal Reserve, while one member—Swati Dhingra—called for a 0.25 percentage point increase.

According to an analysis by the Institute of Directors, the bank decided to raise interest rates because energy bills will rise next month, despite significant government support for households.

But the institute’s Chief Economist Kitty Ussher said most MPC members chose to raise rates at the lower end of market expectations because of “recent data showing the UK economy flat-lining over the summer and early signs that labour vacancies may have peaked.”

At its meeting, the MPC said inflation is now not due to soar as high as previously expected after the UK government announced plans to freeze energy prices for households earlier this month.

It said Consumer Price Index (CPI) inflation is now set to peak at “just under 11 percent,” rather than the 13.3 percent predicted at the MPC meeting in August.

The central bank had previously projected the economy would grow in the current financial quarter but said it now believes GDP will fall by 0.1 percent.

It comes after a reported 0.2 percent fall in GDP in the second quarter and would mean the economy is currently in recession.

Responding to the Bank of England’s forecast, a government spokesman said: “The UK is not alone in facing slow growth, with [Russian President Vladimir] Putin’s illegal invasion of Ukraine and weaponisation of energy presenting a global challenge for economies across the world.

“While several one-off factors have also impacted on the domestic outlook, we have recognised the need to take action. We will support households and businesses with high energy bills and have committed to an unashamedly pro-growth agenda, which the chancellor will detail in the Growth Plan tomorrow.”