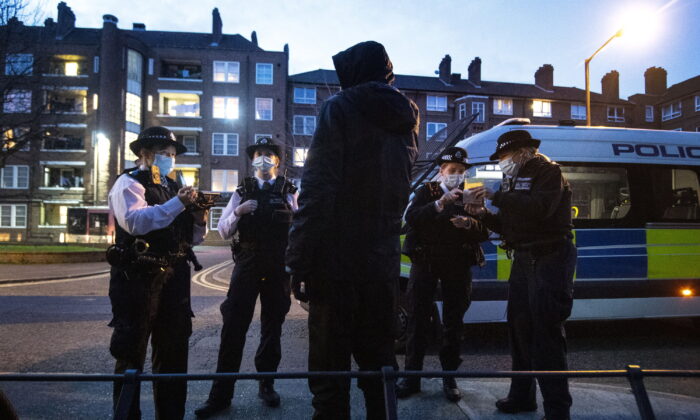 Undated photograph of police carrying out a stop-and-search in London. (Victoria Jones/PA)
UK

Black parents and those of other ethnic minorities are more likely to support the police using stop-and-search powers to look for cannabis than white parents, according to new research.

More than 1,000 parents were questioned in a survey by Deltapoll for the think tank Civitas.

The survey suggested 80 percent of BAME families agreed with stop-and-search being used to eradicate the sale of cannabis on the streets, compared with 70 percent of white parents.

Black parents were also more likely to back government plans for schools to routinely test teenage schoolchildren for the drug.

The report comes in the wake of the row over Child Q, a 15-year-old black girl who was strip-searched by police at a school in London after a teacher suspected she was in possession of cannabis. No drugs were found on her. The school’s head teacher later resigned and four police officers are being investigated for gross misconduct over the incident.

‘Tough Approach to Cannabis’ is not Unpopular

But Civitas’s editorial director, Frank Young, said: “This research blows out of the water the idea that stop and search or school heads taking a tough approach to cannabis is somehow unpopular among black and minority ethnic communities.”

The Civitas survey found 70 percent of BAME parents were worried about their children taking cannabis, compared with just 47 percent of white families and they were less likely to favour legalisation.

Young said: “Policymakers and government ministers should be wary of any rush to legalise cannabis. British parents think it would make their job harder, would do nothing to stop the likelihood of their children being targeted by drug dealers, and overwhelmingly want the police to take a tougher approach to cannabis on the streets.”

One in three parents told Deltapoll cannabis was as ‘”easy as ordering a pizza” with London and Scotland the places where the drug was most accessible.

Cannabis is often seen as a gateway drug to Class A drugs like cocaine.

Simon Harding, professor of criminology at the University of West London, told the Daily Telegraph: “Cannabis can have a more central cultural role in some communities than others. So that’s a possibility. Another is that there can be quite strict discipline in ethnic minority homes, that may be absent in white families.”

Last month the Home Secretary, Priti Patel, lifted restrictions on stop-and-search as part of a new initiative against violent crime in England and Wales.