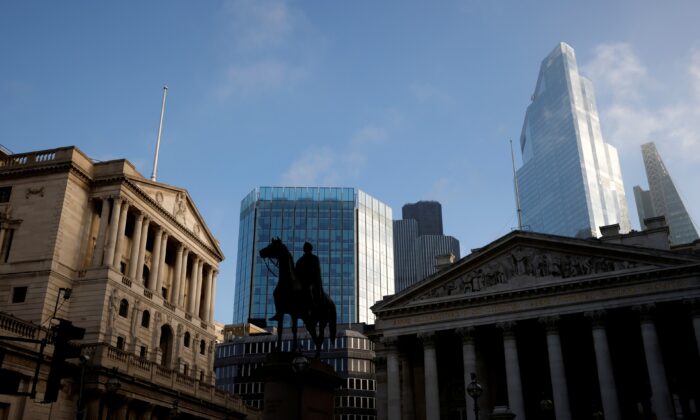 The Bank of England and the City of London financial district in London, on Nov. 5, 2020. (John Sibley/Reuters)
UK

Banks in the United Kingdom are preparing to again roll out lockdown plans used during the COVID-19 pandemic in an effort to stave off potential power shortages this winter amid an energy crisis.

A number of banks, lenders, building societies, and branch officers of overseas banks have been holding regular joint discussions and reexamining policies, such as encouraging employees to work from home, according to the trade body UK Finance, which is coordinating the discussions.

“All firms regardless of size are paying close attention,” Andrew Rogan, director of operational resilience at UK Finance, told Bloomberg. “There is no sense of panic, just everyone is making sure that their ducks are in a row.”

The discussions come as the UK, already battling soaring energy prices, prepares for a cold winter which could spell gas shortages and potential blackouts across businesses and households.

On Thursday, the UK government announced it is lifting a ban on fracking in the country, despite the publication of a government-commissioned report (pdf) by the British Geological Survey (BGS) on the risks of shale gas extraction that was “inconclusive” and said more data was needed.

Business and Energy Secretary Jacob Rees-Mogg said lifting the ban was necessary to aid the UK’s energy security amid Russia’s invasion of Ukraine, which has led to a string of sanctions by the West and prompted the UK to wean itself off imported gas.

“In light of Putin’s illegal invasion of Ukraine and weaponization of energy, strengthening our energy security is an absolute priority, and—as the prime minister said—we are going to ensure the UK is a net energy exporter by 2040,” Rees-Mogg said.

“To get there we will need to explore all avenues available to us through solar, wind, oil, and gas production—so it’s right that we’ve lifted the pause to realize any potential sources of domestic gas,” he added.

Elsewhere this week, the UK government pledged to cap soaring wholesale electricity and gas costs for businesses this winter to ensure they do not go bust. The new Energy Bill Relief Scheme will see the government grant discounts on wholesale gas and electricity prices for all non-domestic customers, including all UK businesses, the voluntary sector, and the public sector, including schools and hospitals.

Automatic discounts will be applied to energy usage initially between Oct. 1 to March 31, 2023.

However, the looming threat of potential blackouts this winter remains very real, and financial firms have been prompted to put plans in place just in case.

Energy Costing Nearly as Much as Rent

Earlier this month, Stefan Behr, the chief executive of JPMorgan in Europe, said the company has plans in place to prepare for a European energy crisis, including backup generators and large offices, and the investment bank will also consider temporarily moving staff to other countries if necessary.

UK Finance told Bloomberg that major financial firms have generators and additional power sources in place that can supply them for around 72 hours. They are also looking into off-site locations around England including in London, Essex, Surrey, and other places that they could move staff to in the event of localized blackouts, UK Finance said.

“Energy prices have almost met the same level as rent costs,” eEnergy Group Chief Executive Officer Harvey Sinclair told Bloomberg. “We’re installing smart meters and identifying whether lights are being left on at night and whether air conditioning units are on too much.”

Elsewhere on Sept. 20, the Bank of England, the UK’s central bank, raised interest rates from 1.75 to 2.25 percent, the highest in more than 13 years, in an effort to cool down red-hot inflation.

The bank’s Monetary Policy Committee also indicated that it believes the British economy is already in recession. The consumer price index rose 9.9 percent annually in August, according to estimates published by the Office for National Statistics.