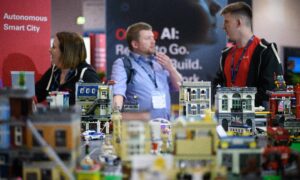 LONDON—British authorities have charged two Russians for the attempted murder of former spy Sergei Skripal and his daughter, Yulia, with military-grade poison Novichok.

“Today marks the most significant moment so far in what has been one of the most complex and intensive investigations we have undertaken in Counter Terrorism policing,” said Assistant Commissioner Neil Basu, the UK’s National Lead for Counter Terrorism Policing.

Police identified the suspects as Alexander Petrov and Ruslan Boshirov, and released their images.

Both are said to be about 40 years old and traveling on Russian passports, although the police noted they were likely using aliases and that these are probably not their real names.

Skripal, a former colonel in Russian military intelligence who betrayed dozens of agents to Britain’s MI6 foreign spy service, and his daughter Yulia, were found unconscious on a public bench in the English city of Salisbury on March 4.

Britain blamed Russia for the poisonings and identified the poison as a deadly nerve agent known as Novichok, developed by the Soviet military in the 1970s and 1980s.

Russia has repeatedly denied any involvement in the attack.

A European arrest warrant has been issued for the two Russians, but prosecutors said they would not be seeking their extradition.

“We will not be applying to Russia for the extradition of these men as the Russian constitution does not permit extradition of its own nationals,” said Sue Hemming, director of Legal Services at the Crown Prosecution Service.

Investigators said that a later Novichok poisoning in Amesbury, which killed a 44-year-old mother of three, was also connected to the two suspects.

The Metropolitan Police gave a detailed account of the suspects’ movements on the day that Skripal and his daughter were exposed to the nerve agent Novichok.

The two Russians are believed to have conducted a reconnaissance trip to Salisbury, where Skripal lived, on Saturday, March 3, and then on the following day were captured on CCTV cameras in the vicinity of Skripal’s house.

Police believe it was then that the two suspects contaminated Skripal’s front door with the military-grade nerve agent.

“They returned to Moscow on Aeroflot flight SU2585, departing at 10.30pm on Sunday, 4 March,” police said in a statement, adding that “we have no evidence that they re-entered the UK after that date.”

Following their exposure to Novichok, Skripal and his daughter spent weeks in hospital critically ill, but police say they are “now making a good recovery.”

A Wiltshire police officer who was part of the investigation was also left seriously ill after being exposed to the nerve agent.

“He continues to make good progress but remains off work,” the police said.

Dawn Sturgess and Charlie Rowley of Amesbury also became exposed to the nerve agent used in the attempted assassination of Skripal.

“We do not believe Dawn and Charlie were deliberately targeted, but became victims as a result of the recklessness in which such a toxic nerve agent was disposed of. We know that Novichok was applied to the Skripals’ front door in an area that is accessible to the public, which also endangered the lives of members of the public and emergency service responders,” police said.

Sturgess, a 44-year-old mother of three, died in hospital on Saturday, July 8. She fell ill on June 30 after being exposed to Novichok and never regained consciousness.

Rowley, her 48-year-old partner, was also exposed and became ill, but survived.

Police said they had undertaken “meticulous and painstaking searches” for any remnants of the discarded nerve agent, but said that “it is impossible to guarantee that there are no other materials in the Salisbury area.”

“Therefore we are repeating the advice from Public Health England that people should not pick up items which do not belong to them.”

Authorities said they do not know where the suspects disposed of the Novichok they used to target the Skripals.