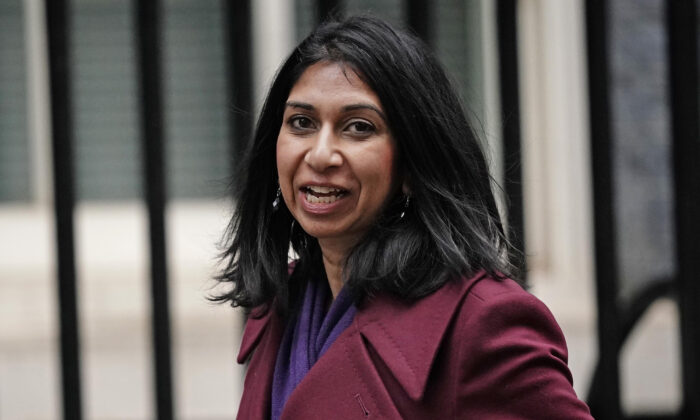 The Attorney General for England and Wales said on Friday she is “carefully considering” whether to order a review on the Edward Colston statue case.

Four people dubbed the “Colston four” were acquitted of criminal damage by a jury on Wednesday after admitting to pulling down a statue of Colston during a Black Lives Matter protest.

Suella Braverman, the attorney general for England and Wales, said on Friday that the verdict is “causing confusion” and that she’s “carefully considering” whether to request a review.

“Trial by jury is an important guardian of liberty & must not be undermined. However, the decision in the Colston statue case is causing confusion,” Braverman wrote on Twitter.

The attorney general said she’s “able to refer matters to the Court of Appeal so that senior judges have the opportunity to clarify the law for future cases,” but the potential review will not affect the result of the case.

“I am carefully considering whether to do so,” she wrote.

The Crown Prosecution Service (CPS) will have to refer the case to the attorney general before she can order a review. Shortly before Braverman posted the tweets, her office told The Epoch Times in an email that the office had not yet received a referral. And the CPS’s email said they were “considering the outcome of the case.”

During the trial, the court heard that two of the defendants, Milo Ponsford and Rhian Graham, brought ropes, which Sage Willoughby passed around the statue’s neck, and Jake Skuse goaded the crowd into rolling the statue 500 meters (1,640 feet) and throwing it into the water.

None of the defendants denied their involvement but claimed that the presence of the slave trader’s statue was a hate crime or an indecent display and that the tearing down of the statue was to prevent a crime.

There were also concerns that the jury had undue pressure placed upon them by excessive rhetoric from defence barristers.

In his closing statement, Liam Walker, defending Willoughby, told the jury: “Make no mistake members of the jury, your decision is not just going to be felt in this courtroom or this city.

“It will reverberate around the world. I urge you all to be on the right side of history,” he added.

Judge Peter Blair criticised the barrister, who then apologised for his remarks.

The judge also told the jury that they must decide the case on the basis of the evidence they had heard, “focus their decision making” on the defendants’ accounts of what happened, and not on the alleged wider impact of the removal of the statue referenced in the defence barristers’ summing up.

Speaking on Thursday to the BBC Radio 4’s “World at One” programme, Buckland said the jury system is “one of our jewels” that’s part of what makes the UK a civilised country, but “occasionally, there will be verdicts that can perhaps be described by some as perverse, as unusual,” he said.

Pressed on whether the outcome of the Colston four case is one that he considers perverse, the Conservative MP replied: “Frankly, I do.”

Buckland said he believes the judge had “properly directed the jury to focus on the evidence and the law,” but added, “if there was any ambiguity about the way in which the law was applied,” the prosecution could seek clarity from the Court of Appeal.

He also told The Telegraph that “we need to have maximum clarity about the way the jury is directed about the law” if the kind of arguments heard in the Colston case are heard again in the future.

“Committing an assault to prevent a crime is a legitimate defence but how far do you take it? How can a statue be guilty of an offence? It is an odd construct to import into a case,” he said.

“I don’t think we want to see our crown courts becoming political playgrounds. They are not places for politics. They are places for the law to be applied and evidence to be assessed.”

Raj Chada, the barrister who defended Skuse, argued that the CPS should never have prosecuted the case and questioned the role Home Secretary Priti Patel played in the prosecution.

Following the verdict, Chada said the prosecution “was not in the public interest in any shape or form.”

CPS code requires the prosecutors to consider both evidence and public interest before making decisions on whether to prosecute a case.

“It is not right that a Home Secretary should be involved in ongoing cases and these cases should be dealt with at a local level according to the interests of justice.”

A CPS spokesperson said: “The decision to charge was made following detailed consideration of the evidence in accordance with our legal test.”

A government spokesman said: “The Home Secretary rightly meets regularly with the police across the country on a range of issues, including high-profile incidents which are of national interest.

“The Crown Prosecution Service are independent and any prosecution decisions they make are based on the evidence they have and completely independent of the police and government.”