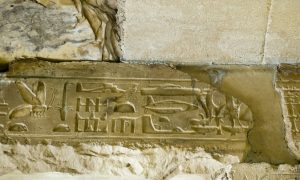 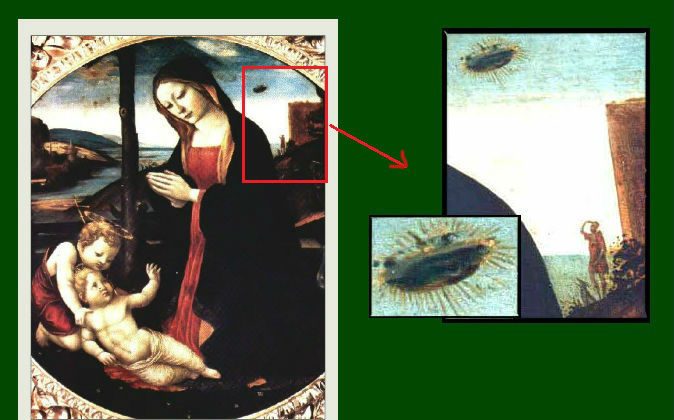 "The Madonna with Saint Giovannino," painted by Domenico Ghirlandaio in the 15th century. (Wikimedia Commons)
Beyond Science

The Middle Ages and Renaissance periods of Western civilization created some of the most iconic and defining works of art in recorded history. The work grew more impressive through the years as artists refined their skills and passed those skills on to their apprentices. Even today, artists and museum visitors alike look to these pieces for inspiration and appreciation.

But, could these paintings which hold so much importance in the history of Western civilization possibly contain something otherworldly, something which pervades the popular culture of modern people, like flying saucers and other UFOs?

Many of the paintings in question are religious in nature, which was very common for the era. In many of these paintings flying saucers, UFOs, laser beams, and men in aircraft seem to be depicted flying overhead observing religious events such as the birth of Jesus, or his crucifixion.

One of the most iconic and referenced examples is “The Madonna With Saint Giovannino,” painted by Domenico Ghirlandaio in the 15th century (see image above); it is currently hanging in the Palazzo Vecchio Museum in Florence, Italy. The painting is a depiction of Saint Mary and baby Jesus, but in the distant background a man looks to the twilit-like sky with his companion, a dog. Both seem to be staring at an object in the sky that looks remarkably like a modern depiction of a flying saucer emanating golden radiant energy.

Several saucer-like apparitions pervade religious paintings from this era, such as “The Annunciation” by Carlo Crivelli (1486) currently on display at the National Gallery of London. This painting depicts a circular object emanating a narrow beam of radiant energy down upon Saint Mary.

This painting is another heavily cited example by supporters of the ancient aliens hypothesis. Artistic scholars and UFO skeptics say that this was an artistic representation of God encircled by his angels.

People who believe these objects could depict UFOs seen in the Middle Ages, say the people of the day may have mistook the appearance of alien aircraft as religious events. This may explain the incorporation of these objects into religiously significant scenes. Others say the depicted objects are simply spiritual in origin and have nothing to do with flying saucers.

They call attention to other paintings representing similar characters and settings, only with clearly defined angels and religious figures. Such paintings include the 15th century painting “Adoration of the Christ Child” by Vincenzo Foppa. The painting is very similar to “The Madonna With Saint Giovannino,” including a figure in the background staring at the sky. The object he is looking up at in this case, however, isn’t a flying saucer, but a winged angel emanating light.

The “Crucifixion,” a 14th century painting in the Visoki Decani Monastery in Kosovo, includes human figures inside what is said by some to represent spaceships. Skeptics cite the frequent personification of the sun and moon in paintings of that time; the sun and moon were often shown as observers during the birth of Jesus, for example. Thus, in this painting, some say the objects are simply the sun and the moon, and the human figures inside are the means of depicting this personification.

A few representations toward the end of the Middle Ages showed strange celestial objects in paintings and art that were not related to religion. A woodcut by artist Han Glaser depicts an event on April 14, 1561, in Nuremberg, Germany, during which several moving celestial objects fall from the sky leaving smoke and apparently witnessed by many people. A French jeton coin produced around 1680 also depicts a wheel-like object in the sky that resembles a flying saucer.

The examples and arguments on both sides stretch on. Perhaps in a few hundred years, when people look to our films and try to understand the objects therein from their points of reference, they will have an equally difficult time figuring them out.