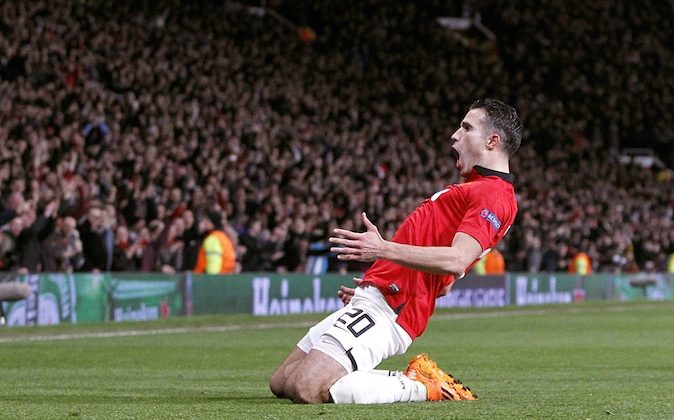 The Dutch forward converted a penalty kick in the 25th minute, side-footed in his second goal in first-half injury time and curled a free kick past goalkeeper Roberto in the 51st.

With Manchester United seventh in the Premier League and first-year manager David Moyes under intense criticism, winning the Champions League likely is the only chance the team has to qualify for next year’s edition of Europe’s top club tournament.

Hulk put Zenit ahead in the 16th minute, Sebastian Kehl tied the score in the 38th and substitute Jose Rondon got the go-ahead goal in the 73rd. Dortmund forward Robert Lewandowski will be suspended for the first leg of the quarterfinals for yellow-card accumulation.

Van Persie was carried off on a stretcher in the final minutes at Old Trafford after hurting his left leg in a challenge. He seemed to be in pain, holding his face and slamming the ground with his hand.

Van Persie received Giggs’ cross-field pass and crumbled when hit in the back by Jose Holebas, then converted the penalty kick to tie the aggregate. Roberto appeared to be screened by his defensive wall when Van Persie curved in the free kick for fourth Champions League goal this season and 14th overall.