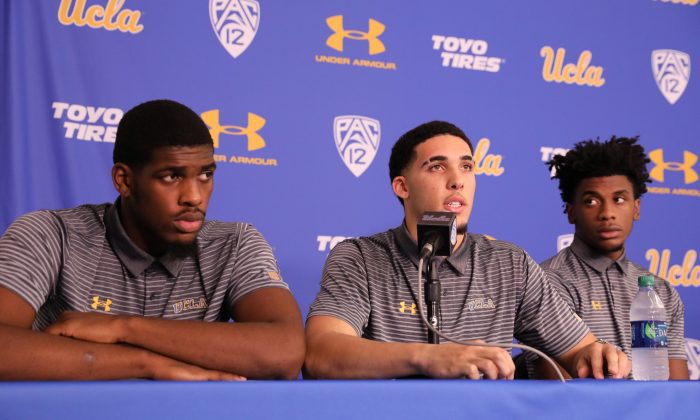 UCLA basketball players Cody Riley, LiAngelo Ball and Jalen Hill speak at a press conference at UCLA after flying back from China, where they were detained on suspicion of shoplifting, in Los Angeles on Nov. 15, 2017. (REUTERS/Lucy Nicholson)
US News

The three players held a press conference on Wednesday in which they expressed their gratitude.

“To President Trump and the United States government, thank you for taking the time to intervene on our behalf. We really appreciate you helping us out,” said Cody Riley.

“I would like to thank President Trump and the United States government for the help that they’ve provided as well,” another player, LiAngelo Ball, said.

Ball also said he regretted the mistake and that he wouldn’t make it again.

“My family raised me better than that, and I’m going to make myself a better person from here on out,” he said. “I’ve learned my lesson from this mistake and am 110 percent sure that I’ll not make a bad decision like this again.”

The third player, Jalen Hill, said, “Thank you to the United States government and President Trump for your efforts to bring us home.”

The statement by the players came just hours after President Trump tweeted about the case.

“Do you think the three UCLA Basketball Players will say thank you President Trump? They were headed for 10 years in jail!” Trump tweeted.

Do you think the three UCLA Basketball Players will say thank you President Trump? They were headed for 10 years in jail!

The players arrived at Los Angeles International Airport on a flight from Shanghai on Tuesday evening.

Trump had raised the issue with Xi at a dinner held during the U.S. leader’s Nov. 8-10 state visit to Beijing.

The three basketball players from the University of California, Los Angeles, were detained by police on Nov. 7 in the Chinese city of Hangzhou over allegations of shoplifting. They were not on the team’s return flight to the United States on Saturday.

A senior White House official said the players had been given relatively light treatment due to Trump’s intervention.

“It’s in large part because the president brought it up,” the official told Reuters.

The UCLA team had been in China for a game against Georgia Tech in Shanghai on Saturday, which UCLA won 63-60. The teams had traveled to Hangzhou earlier in the week to visit the headquarters of the game’s sponsor, Chinese tech giant Alibaba Group Holding Ltd.

The three students, all freshmen, were taken in for questioning by police about alleged shoplifting from a Louis Vuitton store.

They were released from police custody early on Wednesday and had been confined to a luxury hotel pending legal proceedings.

Pac-12 Commissioner Larry Scott, who had not spoken with the three players, said what had occurred was a “very regrettable situation.” Pac-12 is the college athletic conference in which UCLA participates.

UCLA Chancellor Gene Block said in a statement that the university’s Athletics and Office of Student Conduct would review the incident and determine any potential discipline. He said such proceedings would be confidential.

“I want to be clear that we take seriously any violations of the law,” he said.

If you liked this article, please consider sharing it with your family and friends.