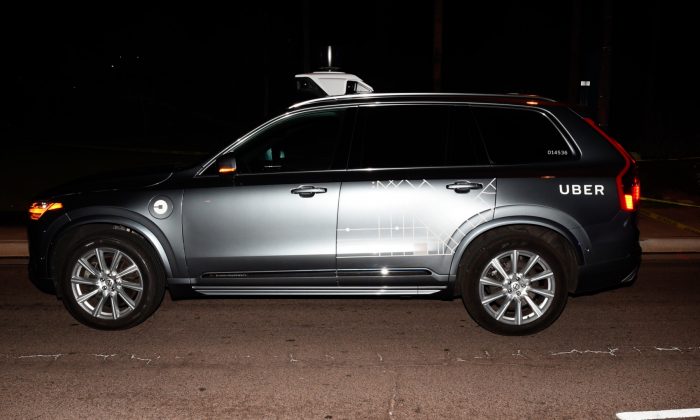 Uber’s self-driving car which struck and killed a pedestrian last year was not programmed to recognize and stop for jaywalkers, according to documents released this week by the National Transportation Safety Board (NTSB).

The finding comes after 20-months of investigation following the death of 49-year-old Elaine Herzberg, who was hit by a Volvo SUV self-driving Uber vehicle while walking her bicycle across the road at night in Tempe, Arizona.

The vehicle had an operator in the driver’s seat and was travelling at around 40 miles per hour in autonomous mode when the incident occurred.

According to the documents released Nov. 5, the accident was a result of the automated Uber not having “the capability to classify an object as a pedestrian unless that object was near a crosswalk.”

The Uber vehicle had been fitted with a number of safety systems, which included “a collision avoidance function with automatic emergency braking, known as City Safety, as well as functions for detecting driver alertness and road sign information,” the report said.

However, it noted that on the day the test took place, all of these functions had been disabled as the test vehicle was being operated in computer control mode.

Software fitted in the Uber vehicle detected Herzberg about six seconds before hitting her, according to the documents.

However, the vehicle did not try and stop before impact and instead alternated between classifying Herzberg as an “unknown object, a vehicle, and then as a bicycle” before concluding that it needed to break just 1.3 seconds before it hit her.

Uber told the NTSB that it “has since modified its programming to include jaywalkers among its recognized objects.”

However, the NTSB claims that Uber ignored safety issues on the night of the incident, which resulted in Herzberg’s death.

“The Uber Advanced Technologies Group unit that was testing self-driving cars on public streets in Tempe didn’t have a standalone safety division, a formal safety plan, standard operating procedures or a manager focused on preventing accidents,” it said.

Uber suspended its self-driving program after the fatal accident but resumed it again nine months later in December 2018—this time ensuring all the vehicles had collision avoidance systems enabled.

Following the release of the report on Tuesday, Uber said in a statement: “We regret the March 2018 crash involving one of our self-driving vehicles that took Elaine Herzberg’s life. In the wake of this tragedy, the team at Uber ATG has adopted critical program improvements to further prioritize safety.

“We deeply value the thoroughness of the NTSB’s investigation into the crash and look forward to reviewing their recommendations once issued after the NTSB’s board meeting later this month.”