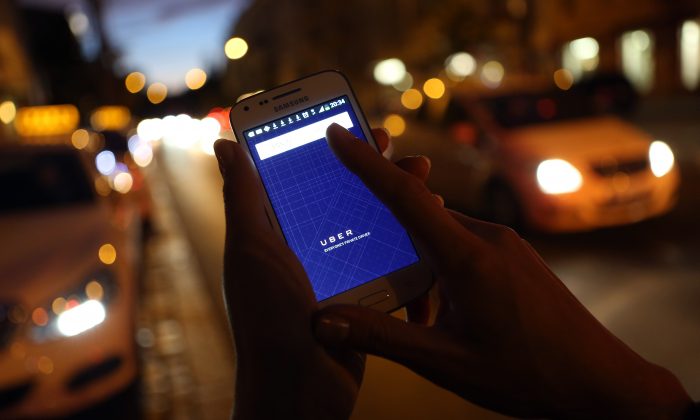 A woman uses the Uber app on a Samsung smartphone on Sept. 2, 2014. (Photo by Adam Berry/Getty Images)
Europe

Uber Drivers in Denmark Must Pay Fine for Every Ride, Supreme Court Rules

COPENHAGEN—The Danish supreme court ratified fines given to four Uber drivers on Sept. 14— for operating illegally paving the way for similar fines on a further 1,500 drivers.

The four taxi drivers, one of whom was fined 486,500 Danish crowns ($78,060), were charged with failing to have permits and for violating a law introduced to combat Uber which imposed extra rules on taxis operating in Denmark.

After launching its service in Denmark in 2014, Uber Technologies Inc was criticized by taxi driver unions, companies and politicians who said the company posed unfair competition by not meeting legal standards required for established taxi firms.

“We are very disappointed for the drivers involved and our top priority is to support them during this difficult time,” an Uber spokeswoman said.

“We are changing the way we do business and are operating in line with local laws across Europe, connecting with professionally licensed drivers,” she said.

The landmark case means the police can issue a fine for each individual ride made by Uber’s more than 1,500 drivers in the country between 2014 and 2017.

A spokesman for the Copenhagen police said it would assess the verdict and decide next week how to proceed.

Parliament passed a law in February 2017 which reestablished that requirements on taxis, such as mandatory fare meters and seat sensors, would have to be respected. Uber has said the new law prompted its withdrawal from Denmark last year.

The company has previously said it would pay any fine given to its drivers, according to Danish newspaper Berlingske.