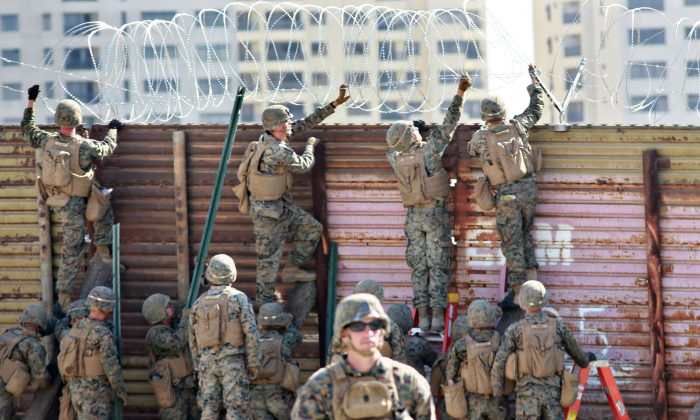 BASE CAMP DONNA, Texas—The number of U.S. troops at the border with Mexico may have peaked at about 5,800, the U.S. commander of the mission told Reuters, noting he would start looking next week at whether to begin sending forces home or perhaps shifting some to new border positions.

The outlook by Lieutenant General Jeffrey Buchanan, while not definitive, suggests that the high-profile military mission could soon achieve its goal of helping harden the border ahead of the expected arrival of caravans of Central American migrants in the coming weeks.

The deployment, which critics have called a pre-election political stunt by President Donald Trump, was initially expected to reach more than 7,000 troops, acting in support of U.S. Customs and Border, or CBP.

U.S. Defense Secretary Jim Mattis authorized the mission through Dec. 15, and while Buchanan did not rule out an extension, he did not think one appeared likely at this point, based on the current tasks assigned to the military.

“It is a hard date. And we have no indications that CBP is going to need us to do our work for longer than that,” Buchanan said on Nov. 14 at Base Camp Donna in Texas, as Mattis toured the site near the Mexico border.

Asked whether he thought the troop levels had peaked, Buchanan said: “I do. We might increase by a hundred here or there, but probably not.”

Mattis defended the deployment on Nov. 14, saying the mission was “absolutely legal,” justified and was improving military readiness.

“We’re pretty much peaked in terms of the number of people that are down there,” Shanahan said.

“I’m not being directed to do anything unnatural from above me,” said Buchanan, who is commander of U.S. Army North.

The Pentagon says there are no plans for U.S. forces to interact with migrants and that they have been carrying out support tasks for CBP, like stringing up concertina wire and building temporary housing for themselves and CBP personnel.

In recent days, up to 1,000 migrants linked to the caravans have arrived in the Mexican border city of Tijuana, with a similar number expected to arrive in the next few days. Thousands more could arrive in border towns over the coming days as the bulk of the caravans arrive.

Buchanan estimated that about 5,800 troops were deployed in total, with about 1,500 in California, 1,500 in Arizona and 2,800 in Texas. He acknowledged he might shift forces east or west along the border if needed.

Mattis told reporters that U.S. soldiers were making rapid progress erecting barriers along the border and estimated the first, construction phase of the U.S. military effort could be completed within 10 days.

Buchanan suggested troops would go home once they had fulfilled requests by CBP.

“At some point in time, I’m not going to keep troops here just to keep them here. When the work is done, we’re going to start downsizing some capability,” he said.

Buchanan would need to make any recommendations on redeployment of troops to General Terrence O’Shaughnessy, the head of U.S. Northern Command. O’Shaughnessy would then report to Mattis.

He suggested a recommendation could be made in the near future.

“I’m looking as early as next week to start thinking through rightsizing, if we need to change. Or do I need to shift (troops elsewhere on the border),” Buchanan said, without predicting when changes might occur.