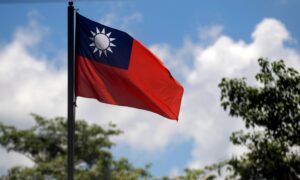 Pompeo issued the statement on Oct. 13 and specifically mentioned China and Russia when pointing out that some countries try to influence the U.S. foreign policy through American think tanks and scholars.

when pointing out that some countries try to influence the U.S. foreign policy through American think tanks and scholars.

“The unique role of think tanks in the conduct of foreign affairs makes transparency regarding foreign funding more important than ever,” the statement read.

The State Department requested that think tanks and other foreign policy organizations that “wish to engage with the Department” disclose explicitly on their websites funding they receive from foreign governments, “including state-owned or state-operated subsidiary entities.”

The State Department will then look into the disclosed information, as the basis for “whether and how to engage” these think tanks.

At the end of May, when giving a Senate floor speech on reforming the global economy and preventing China’s domination, U.S. Senator Josh Hawley warned that the CCP “integrated its economic and security strategies for the last two decades, systematically weaponizing the institutions and procedures of the global economy for its own benefit,” yet the United States “has been slow to respond.”

Wu Zuolai, an independent Chinese scholar in the United States, believes that Pompeo’s statement is a remedy for the loopholes that had allowed China to infiltrate into American think tanks.

The Washington Freedom Beacon disclosed in an article dated July 21 that Peterson Institute for International Economics (PIIE), a prominent U.S. think tank, received millions of dollars from the Chinese telecom giant Huawei. In return, PIIE served as a platform for the CCP to attack the Trump administration and advocate pro-China arguments.

Senator Hawley criticized PIIE for collaborating with the CCP to attract and influence pro-CCP American elites “in D.C. think tanks or corporate boardrooms.”

According to Voice of America’s 2018 statistics, there are more than 1,800 think tanks in the United States, of which nearly 400 are located in Washington, D.C.

More than a dozen research institutes in Washington D.C. received tens of millions of dollars from foreign governments, which turned them into a lobbying tool for these foreign interests.

Sheng Xue, a Chinese writer in Canada, pointed out that these academic institutions in democratic countries have turned out to be pawns for authoritarian regimes. They have not only betrayed national interests, but also brought damage to freedom and democracy all over the world.

Sheng Xue: “The CCP has successfully bribed and controlled the so-called academic institutions in democratic countries, and makes use of them as their mouthpieces. Their misleading statements will then be imported into China to brainwash the Chinese people. As a result, for countries like China that lack freedom and democracy, the painstaking efforts of those democratic activists will be greatly hindered.”

Michael Pillsbury, former government official in the Defense Department, published a report titled “The Chinese Communist Party’s Foreign Interference Operations: How the U.S. and Other Democracies Should Respond.” It revealed that the CCP has put enormous resources into influencing democratic countries, estimated at $10 billion a year.

Pillsbury emphasized that we must be wary of those “Western enablers” who help the CCP extend its influence, and called on congress to introduce new laws to counter the CCP.

Wu Zuolai (independent Chinese scholar in the United States): “The CCP’s United Front, and related departments, are allowed to have cash reserves available at any time to bribe officials such as U.N. officials, WHO officials or U.S. officials. Those Chinese officials can present cash in U.S. dollars directly, something impossible in the United States and civilized nations. But the CCP has been doing this all along. In return, the CCP will obtain certain information, or have the U.S. government make policies in favor of Beijing. In the past several decades, the CCP has been well versed in these things.”

In addition, Pompeo and Secretary of Education Betsy DeVos recently issued a warning that the CCP has used Confucius Institutes as a propaganda and influencing program, posing a threat to free speech. They urged American schools and colleges to examine the activities of Confucius Institutes and “take action to safeguard” our educational environments.