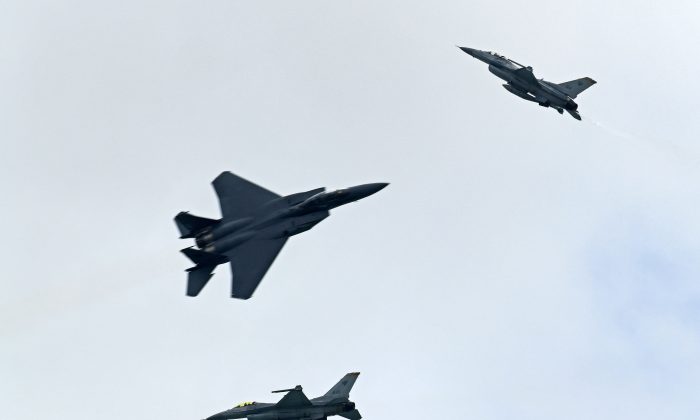 A Singapore Air Force aerobatic team comprising of two F-16Cs and an F-15SG fighter aircraft performs an aerial display during a media preview for the Singapore Airshow in Singapore on February 4, 2018. (Roslan Rahman/AFP/Getty Images)
Asia & Pacific

WASHINGTON—The United States for the first time since 2009 is sending its diplomat responsible for foreign military sales to the Singapore Airshow to promote U.S.-made weapons, a U.S. official said on Feb. 6, as the State Department prepares for an overseas arms sales push.

Ambassador Tina Kaidanow, the top State Department official overseeing arms sales, will be attending the Feb. 6-10 air show, the most important in the Asia Pacific region. Her presence is aimed at boosting sales for U.S. arms manufacturers, such as F-35 jets made by Lockheed Martin Corp and missiles manufactured by Raytheon Co.

President Donald Trump’s administration has been working on a new “Buy American” initiative that calls for U.S. military attaches and diplomats to play a much bigger role in the sale of billions of dollars more in business overseas.

Singapore could be seen as the test case for the Trump administration’s new strategy of having the Pentagon and the U.S. State Department take a more active role in securing foreign arms deals, which require State Department approval.

The move also comes as the United States seeks to counter China’s growing assertions of soft and hard power over Southeast Asia. The Chinese regime has partnered with a number of countries in the region for infrastructure projects, as part of its ambitious “One Belt, One Road” initiative. In recent years, it has also aggressively claimed sovereignty over several disputed islands in the South China Sea, such as the Scarborough Shoal and Spratly Islands.

Just months ago in October 2017, China sent a shipment of 3,000 assault rifles to the Philippines in an attempt to develop closer ties with the country.

Kaidanow visited Vietnam last week for diplomatic talks at the US-Vietnam Political, Security, and Defense Dialogue in Hanoi. Speaking to Singapore-based newspaper Straits Times about the talks, which just preceded the Singapore air show, Kaidanow stressed the importance of the region’s stability to the United States.

She also said China was “obviously a subject of interest for all of us…[and] we’ve made clear we believe strongly that China in the South China Sea needs to abide by international norms as do all of the partners,” she told Straits Times.

At the air show, the State Department said in a statement that Kaidanow “will hold consultations on defense trade issues and promote more than 150 U.S. companies and trade organizations exhibiting the latest aerospace technologies.”

The U.S. exported $49.5 billion of aerospace and defense products to Asia-Pacific in 2016, compared to European demand of $49.8 billion, according to U.S. Department of Commerce data.

Demand for U.S.-made arms is high and foreign military sales in fiscal 2017, comprising the final months of Obama’s term and much of Trump’s first year in office, climbed to $42 billion, compared to $31 billion in the prior year, according to the U.S. Defense Security Cooperation Agency.

Remy Nathan, vice president for international affairs at the Aerospace Industries Association said, “The Asia-Pacific region was our industry’s largest regional export destination for several years before Europe overtook it in 2016.”

Reporting by Mike Stone in Washington. Annie Wu of The Epoch Times contributed to this report.