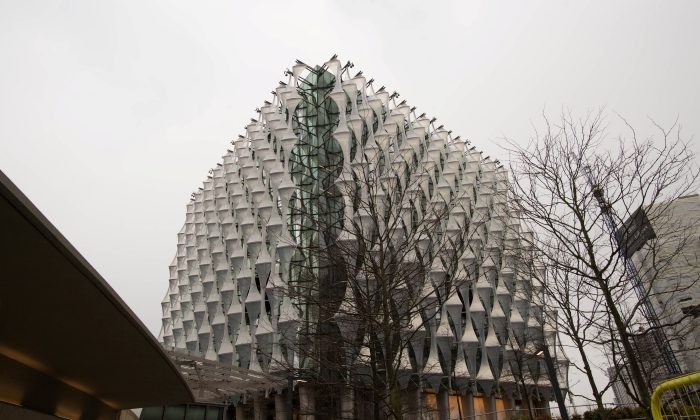 The new United States embassy building is seen during a press preview near the River Thames in London, Britain December 13, 2017. (Reuters/Stefan Rousseau/Pool)
US News

The new 12-storey building on the south bank of the river is at the heart of a huge regeneration project in a former industrial zone known as “Nine Elms”. Set in what will become an urban park, it will open for business on Jan. 16, hosting 800 staff and about 1,000 visitors each day.

“This embassy, when you look out through the windows, it reflects the global outlook of the U.S. going forward in the 21st century: rather looking out, than looking in,” said Woody Johnson, Trump’s appointed U.S. ambassador to Britain.

The U.S. State Department ran a competition to design the new building in 2008. Its $1 billion construction was wholly funded by the sale of other properties in London.

The glass structure “gives form to core democratic values of transparency, openness and equality” a State Department briefing document said. Inside the cube, visitors will be greeted by an imposing stone facade featuring the bald eagle of the United States’ Great Seal.

“This isn’t just a new office, though, it signifies a new era of friendship between out two countries. President Trump wants us to work more closely than ever with the UK,” Johnson said.

The British relationship with its former colony is a broad political, cultural and military alliance forged over the last century and exercised on battlefields around the world.

Prime Minister Theresa May was the first foreign leader to visit the White House after Trump’s surprise election in November 2016 and used the trip to invite him for a full state visit.

While the two leaders have committed to strengthen trade links and have spoken regularly, their governments have disagreed on several issues, such as Trump’s decision to decertify Iran’s compliance with a multilateral nuclear deal, and his move to recognize Jerusalem as the capital of Israel.

Johnson said he hoped Trump could attend an as-yet unscheduled opening ceremony for the new building but that there were no firm plans in place.