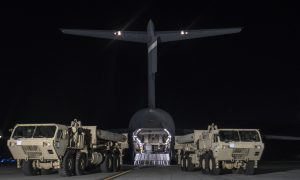 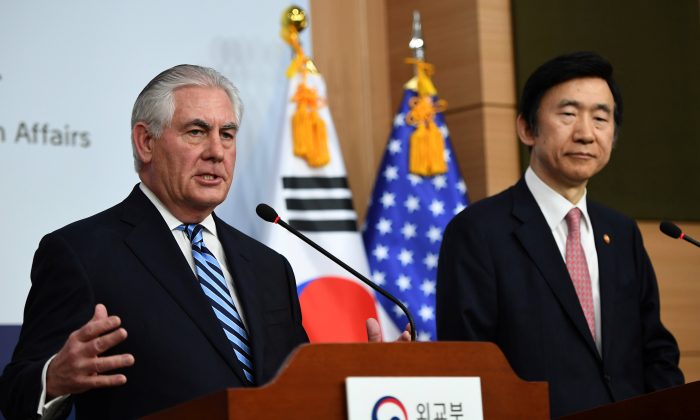 SEOUL—A U.S. policy of strategic patience with North Korea has ended, Secretary of State Rex Tillerson said in South Korea on Friday, adding that military action would be “on the table” if North Korea elevated the threat level.

Tillerson began his first Asian visit as secretary of state in Japan on Wednesday and will travel to China on Saturday with a main focus on finding a “new approach” on North Korea after what he described as two decades of failed efforts to denuclearize the insular nation.

“Let me be very clear: the policy of strategic patience has ended. We are exploring a new range of security and diplomatic measures. All options are on the table,” Tillerson told a news conference in Seoul.

He said any North Korean actions that threatened the South would be met with “an appropriate response”.

“If they elevate the threat of their weapons program to a level that we believe requires action, that option is on the table,” Tillerson said when asked about military action.

“We believe these actions are unnecessary and troubling,” Tillerson said, referring to what South Korea sees as Chinese retaliation in the form of business restrictions in response to the deployment of the missile system.

“We also believe it is not the way for a regional power to help resolve what is a serious threat for everyone. So we hope China will alter its position on punishing South Korea.”

“We hope they will work with us to eliminate the reason THAAD is required.”

North Korea has conducted two nuclear tests and a series of missile launches since the beginning of last year.

Last week, it launched four more ballistic missiles and is working to develop nuclear-tipped missiles that can reach the United States.

South Korean Foreign Minister Yun Byung-se told the joint news conference the missile system was only intended to defend against North Korea, not any other country.

Facing Off at the DMZ

Earlier, Tillerson visited the Demilitarized Zone, and looked across the heavily fortified border at armed North Korean guards, staring back. He met some of the 28,500 U.S. troops stationed in South Korea.

The latest bout of tension with North Korea comes at a time of political turmoil in South Korea. President Park Geun-hye was ousted last week after being impeached in a corruption scandal and an election for a new president will be on May 9.

A liberal opposition politician, Moon Jae-in, who has raised questions about the THAAD deployment, is leading in the opinion polls.

Tillerson, a former oil executive with no prior diplomatic experience, said he expected a new government would “continue to be supportive” of the deployment, adding it was also intended to protect U.S. troops in South Korea.

China resents U.S. pressure to do more on North Korea and says it is doing all it can but will not take steps to threaten the livelihoods of the North Korean people.

China has urged North Korea to stop its nuclear and missile tests and said South Korea and the United States should stop joint military exercises and seek talks instead.

Chinese Foreign Ministry spokeswoman Hua Chunying reiterated that talks were the best way to resolve the problems of the Korean peninsula.

“As a close neighbor of the peninsula, China has even more reason than any other country to care about the situation,” she told a briefing.

Hua also said the THAAD would “upset the regional strategic balance”. Its radar, with a range of more than 2,000 km (1,250 miles), meant it could cover a large part of China, far outside the scope of the threat South Korea faces, Hua said.

“We do not oppose South Korean taking necessary measures to protect its security, but these measures cannot be based upon harming the security interests of South Korea’s friendly neighbor, China,” she said.