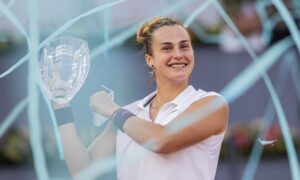 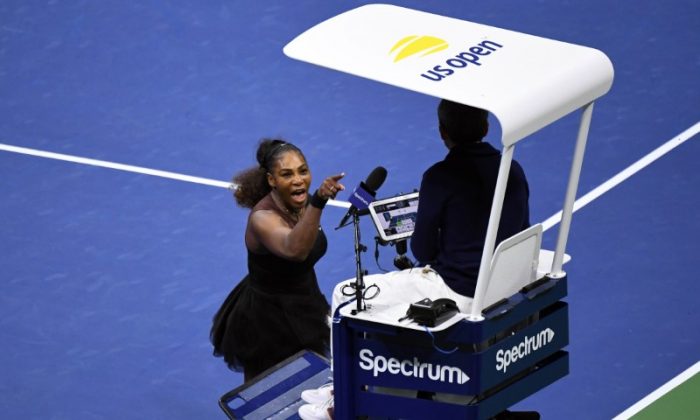 Serena Williams of the United States yells at chair umpire Carlos Ramos in the women's final against Naomi Osaka of Japan on day thirteen of the 2018 U.S. (Danielle Parhizkaran-USA TODAY SPORTS)
Sports

Serena Williams Fined $17,000 for Violations During Loss in US Open Final

The United States Tennis Association fined Serena Williams $17,000 on Sept. 9 over a series of violations during a mid-game meltdown in her U.S. Open finals loss to Naomi Osaka.

Williams, a six-time U.S. Open champion who was seeking a record-equaling 24th Grand Slam singles title on Sept. 8, was  warned for a coaching violation before being deducted a point for smashing her racquet. She then called chair umpire Carlos Ramos a “thief” in a heated tirade that cost her a game.

In the wake of Osaka’s first Grand Slam triumph by a 6-2, 6-4 score, there were messages of support for Williams as well as those condemning her behavior and agreeing with the umpire’s calls.

Tennis great Billy Jean King wrote on Twitter: “When a woman is emotional, she’s ‘hysterical’ and she’s penalized for it. When a man does the same, he’s ‘outspoken’ and there are no repercussions. Thank you, [Serena Williams], for calling out this double standard. More voices are needed to do the same.”

Yet Australian Margaret Court, whose tally of Grand Slam singles titles is being chased by Williams, had little sympathy for the 36-year-old American, a former world No. 1.

“We always had to go by the rules,” Court, who dominated tennis during the 1960s and early 1970s, said according to a report in The Australian.

“It’s sad for the sport when a player tries to become bigger than the rules,” Court added. “Because the young player outplayed her in the first set, I think the pressure got her more than anything.”

The drama started when Ramos handed Williams a coaching violation early in the second set because of hand gestures made from the stands by her coach Patrick Mouratoglou. He later admitted the offense, which isn’t allowed yet is rarely enforced.

Shortly after, Williams made several errors and smashed her racquet on the court, resulting in a point being awarded to Osaka. Williams lost her cool in arguing about the point moments later, prompting another penalty from the umpire.