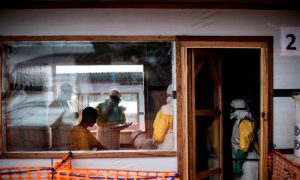 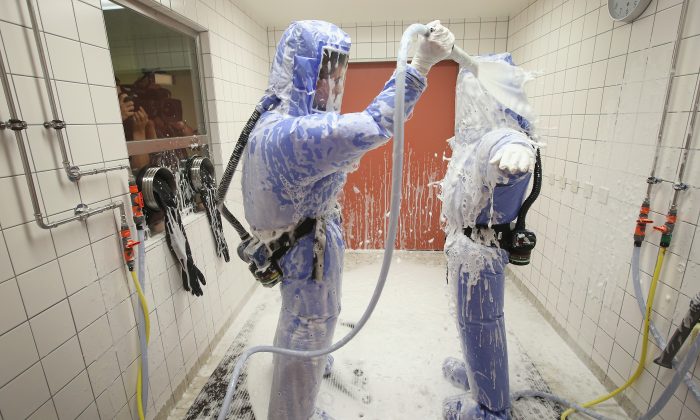 A nurse and a doctor for tropical medicine wearing isolation suits demonstrate the decontamination procedure as part of ebola treatment capability at Station 59 at Charite hospital on Aug. 11, 2014 in Berlin, Germany. (Sean Gallup/Getty Images)
US News

A U.S. healthcare worker who was being monitored for the Ebola virus after treating patients in the Democratic Republic of Congo was released from a Nebraska hospital on Jan. 12 after doctors said they had seen no signs of the deadly disease.

The individual, whose name was not released for privacy reasons, did not develop Ebola symptoms during 21 days of monitoring at Nebraska Medical Center in Omaha, Nebraska, the center said in a statement.

Symptoms such as fever and abdominal pain may appear up to three weeks after contact with the virus, according to the U.S. Centers for Disease Control and Prevention.

The healthcare worker arrived for monitoring in Omaha on Dec. 29.

Officials said the individual left the city on Jan. 12.

If symptoms had developed, the medic would have been moved to the Nebraska Biocontainment Unit, one of only a few in the United States for treating highly infectious and dangerous diseases.

The Ebola outbreak in Democratic Republic of Congo is the second worst ever and has killed 385 of the 630 people likely infected since it began six months ago, according to the World Health Organization.