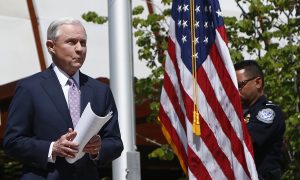 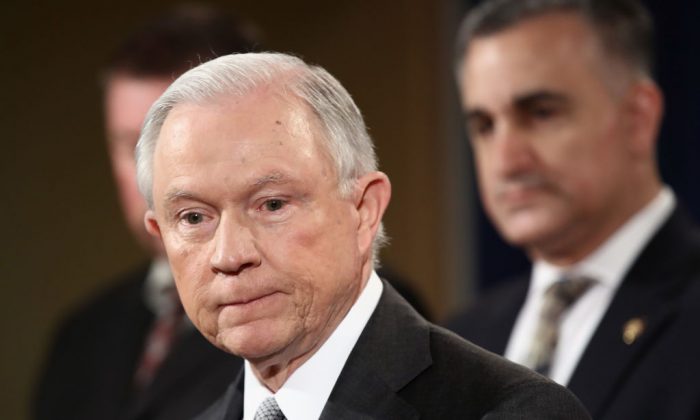 Attorney General Jeff Sessions during the Sergeants Benevolent Association of New York City event in Washington on May 12, 2017. (Getty Image)
Crime and Incidents

WASHINGTON—The Trump administration called for tougher charges and longer prison time for criminals in a move to return to strict enforcement of mandatory minimum—sentencing rules, according to a memo the U.S. Department of Justice released on Friday.

In a two-page memo to federal prosecutors, Attorney General Jeff Sessions reversed course from the previous Obama administration and told the nation’s 94 U.S. attorneys to “charge and pursue the most serious, readily provable offense.”

The move is in line with tough campaign rhetoric against criminals by President Donald Trump, a Republican who had also pledged to support police and law enforcement.

“It ensures that the Department enforces the law fairly and consistently, advances public safety and promotes respect for our legal system,” Sessions said in the memo dated on Wednesday.

Sessions will make additional comments on the changes later on Friday, the Justice Department said in a separate statement.

Under former president Barack Obama, a Democrat, the Justice Department had sought to reduce mandatory sentencing to reduce jail time for low-level drug crimes and ease overcrowding at U.S. prisons.

Obama’s then-attorney general Eric Holder had advised prosecutors to avoid pursuing the toughest charges in certain cases, such as more minor drug offenses, that would have triggered mandatory sentencing under laws passed in the 1980s and 1990s.

In recent years, however, there has been growing bipartisan interest among some in Congress, the U.S. states and the courts to reevaluate lengthy prison terms.

Sessions’ memo rescinds the Obama-era policy, saying prosecutors must now disclose all information about a case to the courts and follow current sentencing rules. It also requires prosecutors seeking a different sentence to get approval and make a case in writing.