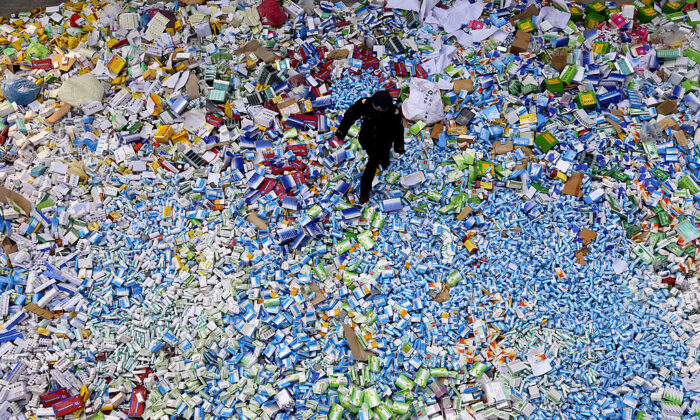 A Chinese policeman walks across a pile of fake medicines seized in Beijing in recent months on March 14, 2013. (STR/AFP via Getty Images)
US-China Relations

China’s state policies for aggressively building up its pharmaceutical sector have resulted in the United States becoming heavily dependent on Chinese drug imports.

U.S. experts recently voiced alarm about China’s rise in becoming one of the world’s largest suppliers of active pharmaceutical ingredients (API), which are individual components within drugs that give therapeutic effects.

“As of August 2019, only 28 percent of the manufacturing facilities making APIs to supply the U.S. market were in our country,” said Janet Woodcock, director of the Center for Drug Evaluation and Research at the Food and Drug Administration (FDA), during a congressional hearing on Oct. 30.

“By contrast, the remaining 72 percent of the API manufacturers supplying the U.S. market were overseas.”

China has emerged as a key API supplier by driving its biotechnology development through state policies, including “Made in China 2025” and the 13th Five-Year Plan (2016–2020), according to another witness at the hearing, Michael R. Wessel, a commissioner at the U.S.–China Economic and Security Review Commission (USCC).

“China has supported its chemical and pharmaceutical sector, driving out of many U.S. lines of production, or out of business altogether,” Wessel said.

For example, the United States is no longer making penicillin, after its last penicillin fermentation plant in Syracuse, New York, closed down in 2004.

Additionally, he said, Beijing is “luring top U.S. researchers to work for its companies” through state recruitment programs including Thousand Talents in order to “meet the goals of the Chinese Communist Party’s plans.”

The Thousand Talents program has recently received heightened scrutiny from U.S. authorities due to several program participants being charged or convicted of stealing intellectual property from U.S. entities to transfer to China.

In hopes of entering China’s restrictive health care market, Wessel said U.S. health-related companies have stepped up their investments in China, which has led to “further erosion of productive capabilities here in the United States, as well as the migration of research and development to China.”

U.S. drugmaker Pfizer opened the global headquarters for its generic division in Shanghai in May, according to Chinese state-run media. In August, U.S. biotech company Thermo Fisher Scientific announced that it will set up a new production base in Suzhou City in eastern China’s Jiangsu Province.

“China could weaponize its position in the supply chains to our disadvantage and peril,” Wessel said.

India is the world’s largest manufacturer of generic drugs—medicines that are legal copies of brand-name drugs that are marketed after patents for those original drugs expire.

The United States obtains the majority of its generic drugs from India and China, the former accounting for 24.5 percent and the later 8.5 percent, according to data from the Washington-based Association for Accessible Medicines.

But the South Asian country is also heavily dependent on China for supplying the API that make up the drugs, said Rosemary Gibson, senior advisor of New York-based nonprofit bioethics research institute The Hastings Center, during the hearing.

India’s English-language Economic Times, citing a report by consultant firm Boston Consulting Group and India’s industry association Confederation of India Industry, reported in 2014 that more than 90 percent of the country’s API and other intermediates originated from China.

The supply of generic drugs from India isn’t secure, as “a deterioration in India’s relationship with China could trigger China to withhold supplies of vital components in essential medicines,” Gibson said.

China’s market share in the U.S. generic drug market will only increase over time, Gibson said, as the Chinese regime subsidizes its drugmakers so they can squeeze out global competitors by selling below manufacturing costs.

“China doesn’t have to hack the electric grid or fire a missile to take America down; it can withhold antibiotics and other essential medicines.”

Americans are also at risk of using substandard drugs from China, as there is a lack of regulation and oversight of Chinese drugmakers, Wessel said.

In 2007 and 2008, at least 81 Americans died and hundreds became sick after being injected with contaminated blood thinner heparin manufactured by a Chinese production facility.

Then, in July 2018, the FDA recalled valsartan medication that contained an API made by a company in China that was contaminated with a carcinogenic chemical used to make liquid rocket fuel. Valsartan is commonly prescribed to treat heart failure and high blood pressure.

In August 2018, the FDA issued an alert for certain lots of thyroid API—used to make medicine that treats hypothyroidism—manufactured by Chinese API maker Sichuan Friendly Pharmaceutical. The FDA found that the API had an inconsistent level of active ingredients, which could result in life-threatening adverse health consequences.

“China lacks the regulatory infrastructure, resources and, it appears, commitment to regulate its industry, which creates a clear and present danger,” Wessel said.

“The problem of [China’s] corruption also impacts the safety of the sector’s products.”

For example, in 2007, Zheng Xiaoyu, former head of China’s State Food and Drug Administration, was given a death sentence for taking more than 6.5 million yuan (about $855,000) in bribes from eight companies, according to Chinese state-run media.

He was convicted of approving many substandard medicines, including an antibiotic blamed for at least 10 deaths in China.

In July 2018, Chinese pharmaceutical company Changsheng Bio-Technology was placed under investigation for suspected corruption after it shipped out more than 250,000 doses of a faulty DTap vaccine to health facilities in Shandong Province.

The DTap vaccine is a combination vaccine to provide children immunity against diphtheria, pertussis, and tetanus.