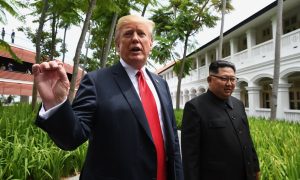 North Korea May Enter the Fold
0 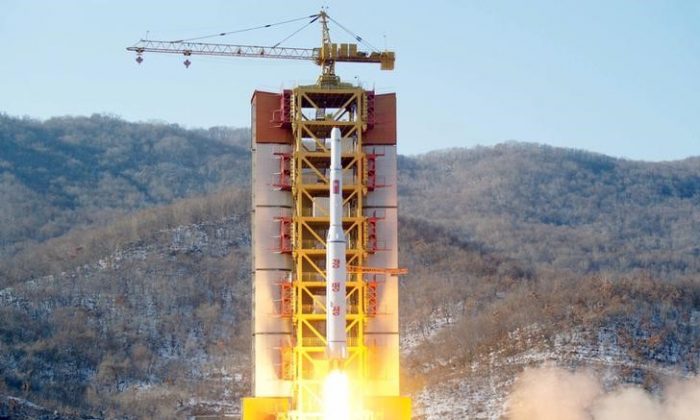 A North Korean long-range rocket is launched into the air at the Sohae rocket launch site, North Korea, in this photo released by Kyodo Feb. 7, 2016.(REUTERS/Kyodo)
International

WASHINGTON—The missile engine test site that North Korean leader Kim Jong Un had reportedly promised to destroy is a major facility in the western part of the country that has been used for testing engines for long-range missiles, according to a U.S. official.

President Donald Trump told reporters after their June 12 summit that Kim had pledged to dismantle one of his missile installations, North Korea’s most concrete concession at the landmark meeting in Singapore.

At the time, the president did not name the site.

However, an unnamed U.S. official identified it on June 20 as the Sohae Satellite Launching Ground, saying North Korea “has used this site to test liquid-propellant engines for its long-range ballistic missiles.”

Pyongyang has said its missiles can reach the United States.

There was no immediate word on the exact timetable, and North Korea has not publicly confirmed that Kim made such a commitment.

Trump and Kim signed a joint statement in Singapore with North Korea committing to peace, complete denuclearization, and a rebooted relationship with the United States. Kim also agreed to allow American authorities to retrieve the remains of American soldiers killed in the Korean War.

Kim’s promise to destroy the missile engine testing site was not part of the written agreement. Trump also made an unwritten promise to stop joint war games with South Korea as nuclear disarmament negotiations continue.

Trump hailed the meeting—the first between a sitting American president and a North Korean leader—a success, writing on Twitter that “there is no longer a Nuclear Threat from North Korea.”

Just landed – a long trip, but everybody can now feel much safer than the day I took office. There is no longer a Nuclear Threat from North Korea. Meeting with Kim Jong Un was an interesting and very positive experience. North Korea has great potential for the future!

U.S.-based North Korea monitoring group 38 North said in an analysis last week that there had been no sign of any activity toward dismantling Sohae or any other missile test site.

The U.S. official said, “The United States will continue to monitor this site closely as we move forward in our negotiations.”

If Pyongyang destroys the missile engine testing site, it will be the latest in a string of concessions by the communist regime. Kim has already released three American prisoners, destroyed a nuclear bomb testing site, and agreed to halt missile tests while negotiations with Washington continue.

What little is known about the Sohae site, located in Tongchang-ri, has been pieced together from analysts’ assessments and North Korean state news agency KCNA.

It was reported to have been established in 2008 and have research facilities nearby for missile development as well as a tower that can support ballistic missiles. The site is mainly used to test large Paektusan engines built for long-range missiles such as the Hwasong-15.

Jenny Town, a research analyst at 38 North, says North Korea has spent considerable effort and resources to develop the site as a “civilian space program” facility, denying that it has a military application.

“Presumably, if North Korea does destroy the Sohae facility, they are also signaling that they are willing to stop satellite/rocket launches this time around as well, a point that has derailed negotiations in the past and is a significant new development,” she said.

North Korea has other missile testing facilities but the shutdown, if it happens, would be significant, analysts said.

“The missile testing is not just done in Tongchang-ri, so it does not necessarily mean all ICBMs (intercontinental ballistic missiles) will be disabled,” said Moon Hong-sik, a research fellow at the Institute for National Security Strategy in South Korea. “But the most well-known one is this, so there is a great symbolic meaning if this is shut down.”

North Korea announced ahead of the Singapore summit the suspension of its ICBM testing and also demolished its nuclear bomb test site. U.S. officials, however, have cautioned that such actions are reversible.

Asked on Wednesday whether North Korea has done anything toward denuclearization since the summit, U.S. Defense Secretary Jim Mattis told reporters, “No, I’m not aware of that. I mean, obviously, it’s the very front end of a process. The detailed negotiations have not begun. I wouldn’t expect that at this point.”

Yang Uk, senior research fellow at the Korea Defence and Security Forum, agreed that a shutdown of the Sohae testing site would be a symbolic gesture rather than a move to technically disable its missile capabilities.

“Sohae has technically been used as an ‘engine’ testing site. North Korea has already finished developing (the) Baekdu Engine, so there would be no problem running ICBM missile programs even if they close down the Sohae site,” Yang said.

The move will only be significant if North Korea takes more than cosmetic steps to fully shutter the site, not just the test stand, said Melissa Hanham, a senior research associate at the James Martin Center for Nonproliferation Studies.

“It’s only a good deal if they dismantle all the facilities at Sohae and re-employ the scientists in something civilian,” she said.