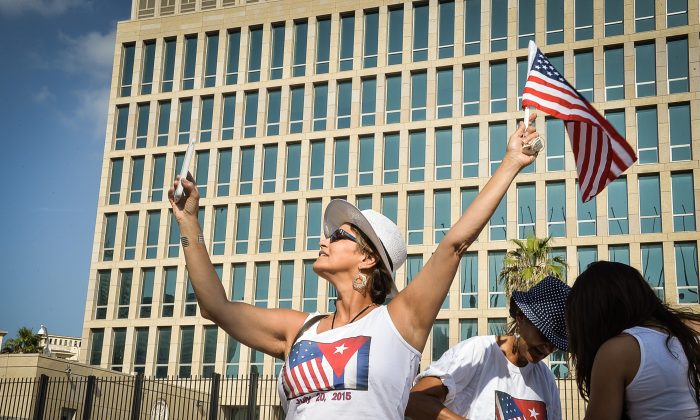 A tourist makes a selfie holding a US Flag in front of the US Embassy in Havana on July 20, 2015. (Adalberto Roque/AFP/Getty Images)
US News

WASHINGTON—The United States is cutting its diplomatic presence in Havana by more than a half and will warn U.S. citizens not to visit Cuba because of targeted attacks that have injured at least 21 U.S. personnel, a senior official said on Friday.

“Routine visa operations are suspended indefinitely,” said the official, who like others on a conference call with reporters spoke on condition of anonymity. He said non-essential embassy staff would be withdrawn as well as all family members.

U.S. and congressional officials told Reuters on Thursday Washington was crafting a plan for a drawdown of staff from the Havana embassy in response to unexplained incidents that have harmed the health of some U.S. diplomats there.

The Cuban government has denied any role and is investigating. But it has so far said it has been unable to determine the cause.

The senior State Department official said that neither the United States nor Cuban governments had been able to identify who was responsible for the attacks but stressed that “the government of Cuba is responsible for taking all appropriate steps to prevent attacks on our diplomatic personnel in Cuba.”

Though Washington has not cast direct blame on Cuban authorities, Secretary of State Rex Tillerson reminded Cuban Foreign Minister Bruno Rodriguez in Washington on Tuesday of Cuba’s obligation to protect diplomats and their families.

“Because our personnel’s safety is at risk and we are unable to identify the source of the attack, we believe that U.S. citizens may also be at risk and warn them not to travel to Cuba,” the official added.