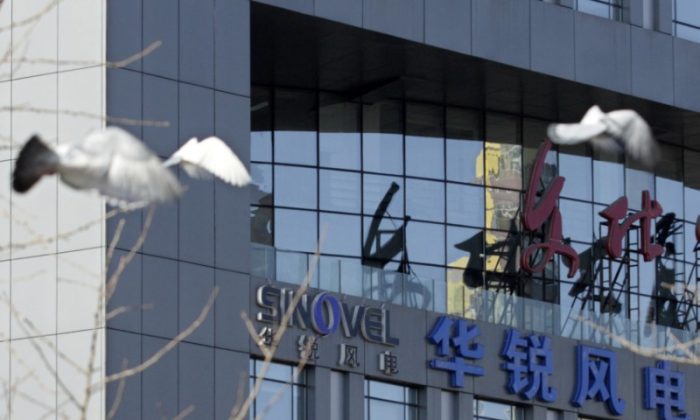 Chinese wind turbine maker Sinovel Wind Group Co. was convicted on Jan. 24 of U.S. charges that it stole trade secrets from AMSC, an American energy technologies company, that resulted in losses of over $800 million.

A federal jury in Madison, Wisconsin, found Sinovel, once AMSC’s largest customer, guilty on all charges it faced, including conspiracy, trade-secret theft, and wire fraud, the U.S. Justice Department said.

The conviction exposes Beijing-based Sinovel to hundreds of millions of dollars in potential fines, according to the Justice Department. It is scheduled to be sentenced on June 4.

Sinovel saw its shares slide 4 percent at morning trade on Jan. 25. The stock has lost 46 percent since the charges were brought in June 2013, giving it a market value of about $1.4 billion.

The charges were announced amid heightened concern about Chinese theft of U.S. trade secrets and a legal battle in Chinese courts pitting the Massachusetts-based AMSC against Sinovel, one of the world’s largest turbine makers.

The case centered on technology that AMSC, formerly known as American Superconductor Inc., developed to regulate the flow of electricity from wind turbines to electrical grids, which Sinovel had purchased for its products.

Prosecutors said that as of March 2011, Sinovel owed AMSC $100 million for products that had been delivered and had contracts to buy more than $700 million in future products.

But Sinovel conspired, beginning in 2011, to obtain AMSC’s copyrighted information and trade secrets so that it could make wind turbines and retrofit existing ones in order to avoid having to pay AMSC, according to prosecutors.

An indictment said Sinovel recruited Dejan Karabasevic, an employee of an AMSC subsidiary, to join the Chinese company and to secretly copy information from AMSC’s computer system, including the source code for the PM3000, part of its wind turbine control system.

Sinovel then commissioned several wind turbines in Massachusetts and incorporated software that it had compiled from the stolen PM3000 source code, prosecutors said.

Charges are pending against Karabasevic, who lives in Serbia, and two individuals who live in China and worked for Sinovel at the time: Su Liying, the deputy director of its research and development department, and Zhao Haichun, a technology manager, according to court records.